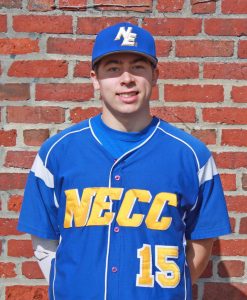 Nolan Steevens earned a 4. GPA for both the fall and spring semesters. Earning him a spot on the Academic All American First Team.

In order to be eligible for the award, a student-athlete must obtain a grade point average (GPA) for the year of 3.6 or higher for the academic year. Based on the overall GPA student-athletes are named either First, Second or Third Team Academic All-American.

The All-American student-athletes include Nolan Steevens of Wilton, NH, a member of the baseball team who earned First Team recognition. Steevens is only the second, two-time honoree in school history to earn a 4.0 GPA for the fall and spring semesters. In April, at NECC’s inaugural Athletic Awards Banquet, Steevens was also named the Male Scholar Athlete of the Year. On the field, he played in 37 of the team’s 42 games and batted .375 finishing seventh on the team in both hits and runs scored with 42 and 34 respectively.

Both Andrew Caulfield of Malden and Richard Reidy of Amesbury joined Steevens as honorees from the baseball team with the Second and Third team recognition respectively. Caulfield accumulated a 3.85 GPA for the year while seeing action in 18 games and batting .320 in 50 at bats. Reidy, who recorded a 3.79 GPA, appeared in 12 games on the mound for the Knights this season including 10 starts and finished with a record of 6-3. Reidy recorded six consecutive wins for the Knights which was highlighted by a no-hitter on May 18th against Suffolk County CC in game one of the District F Super-Regional Tournament. 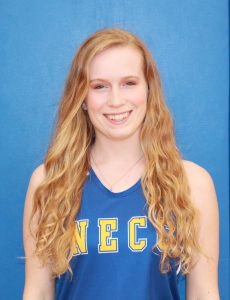 Katelyn Richardson of Wilmington, a member of the cross country and track and field teams, earned Second Team honors with a 3.85 GPA.

Katelyn Richardson of Wilmington, a member of the cross country and track and field teams, earned Second Team honors with a 3.85 GPA. For Richardson it was an All-American sweep as she also earned the award from the United States Track and Field and Cross Country Coaches Association for her sixth place finish in the high jump at the NJCAA National Championships.

Four others were also named Third Team Academic All-Americans, Rachel Amiss and Alison Spampinato both of Salem, NH; Amanda Forgetta of Mallabar, FL, and Jacob Cole of Newburyport. Amiss, Spampinato and Forgetta played in every match for the volleyball team during the season. Amiss led the team in blocks, while Spampinato led the team in service aces and Forgetta led the team in kills. Cole was a member of both the track and cross country squads and served as leader in the team’s sprinting events last spring.