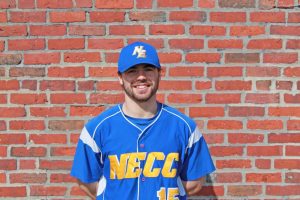 Ryan Collins of Peabody was named to the Division III Gold Glove Team.

Sophomore shortstop Ryan Collins, of Peabody, who is a member of the Northern Essex Community College Knights baseball team, has been named to the NJCAA Division III Gold Glove Team presented by the American Baseball Coaches Association and Rawlings as the nation’s top defensive shortstop.

Collins, who had a fielding percentage of .944 this season in 39 games played, had 46 put outs and 90 assists on the season while also playing a role in turning 14 double plays over the course of the season.

With his junior college eligibility complete and earning his degree, Collins will join NCAA Division II Lincoln Memorial University in Harrogate, TN for his final two seasons. The Railsplitters, who were the 2018 South Atlantic Conference tournament champions participated in the NCAA tournament Southeast Regional for a second straight season.