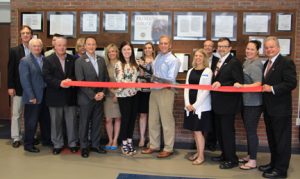 NECC President Lane Glenn (center) prepares to cut the ribbon during the dedication of the Freedom Shrine.

Copies of historical documents will be in plain sight for Northern Essex Community College faculty, staff, and students to view thanks to a donation by the Exchange Club of Haverhill.

An old billboard that once held Northern Essex club notices and announcements has been replaced by a Freedom Shrine, which is a collection of reproductions of selected historic United States documents.

The Freedom Shrine consists of 20 mounted reproductions from The Declaration of Independence, to The Star Spangled Banner, to General McAuliffe’s 1944 Christmas Message, and Theodore Roosevelt’s Letter on Cuba. They are mounted inside a 16 x 4 foot frame designed and built by NECC carpenter Kyle White. The shrine hangs on the brick wall of the second floor foyer in the Spurk Building on the Haverhill campus.

Members of the Exchange Club of Haverhill and the Greater Haverhill Chamber of Commerce, as well as Northern Essex administrators attended the ribbon cutting and dedication on Monday, June 25. NECC President Lane Glenn thanked club members for donating the Freedom Shrine to the college. He noted that it aligns with NECC’s role in promoting civic education. 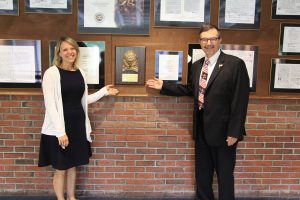 Haverhill Attorney Robert “ Bob” Harb, past Haverhill Exchange Club president as well as national president, who chaired the committee overseeing the donation and installation of the Freedom Shrine, said he was excited about the dedication. “These documents set forth the principles of our country,” he said. By locating the shrine in the busy second floor foyer of Spurk, he said, the hope is that NECC students, as well as others who travel the hallway, will have the opportunity to reflect on the “freedoms afforded by the documents.”

Reading famous and recognizable lines from several of the documents, Harb explained the evolution of the Freedom Shrine. It originated from the Freedom Train. The train toured the country in 1947 and again in 1977 carrying an exhibit of famous “documents of liberty”. Exchange Clubs have installed thousands of the shrines in courthouses, libraries, airports, and schools around the country. The Freedom Shrines are used by teachers, students, and other groups to study American history.