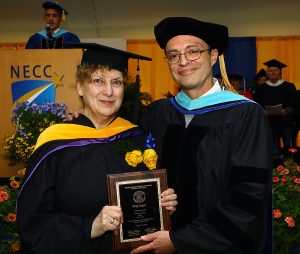 Four members of Northern Essex Community College’s faculty and staff, Terry Cargan of Haverhill, Bernard “Bill” Zannini and Lynne Nadeau of Salem, NH, and Ann Grandmaison of Nashua, NH, were recently honored with the title of emeritus during NECC’s 56th annual commencement ceremony in May.

Cargan taught English at Northern Essex for 30 years, 12 years as an adjunct and 18 years as a full-time faculty member.

Northern Essex President Lane Glenn noted that she was as popular with her students as she was with other faculty members. “She is passionate about her subject, she constantly strove to create a stimulating learning environment for her students,” he said.

In addition to her success in the classroom, Cargan was a faculty leader, serving for close to 15 years as chair of the Executive Committee of the All College Assembly, an advisory board to the president.

She was named professor emerita of English. 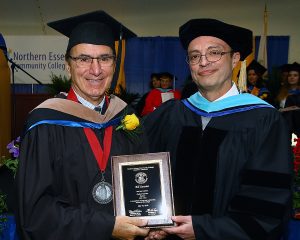 Retired NECC Business Professor Bill Zannini was one of four NECC employees to receive the title of emeritus.

Zannini, left a very successful 30-year career in corporate research and development to pursue a second career in college teaching.

He started teaching business at Northern Essex part time in 2002 and he joined the faculty full time in 2004.

Entrepreneurship was his passion and he created several courses on that topic as well as a business plan competition that was held for 10 years at the college each May.

His business plan competition challenged students to put their small business ideas on paper, creating plans for achieving their dreams, said Glenn. “Bill also shared his business expertise with the college, serving for seven years, as chair of the Finance Committee.”

He was named professor emeritus of business.

Grandmaison was coordinator of electronic services/research services for the Harold Bentley Library on the Haverhill campus for almost 20 years, until her retirement in June of 2017.

“She created a library that was the heart of the college, a place where students felt supported, not only with their academic research, but also as individuals.   She listened, and encouraged them,” he said. “Ann also embraced the role of a library as a cultural center, creating programs, readings, and book groups that brought the college community together. “

She was named coordinator emerita of library research services.

Nadeau started at Northern Essex as a writing tutor in 2001 and she was director of tutoring services when she left last year.

“It’s a well proven fact that students who access tutoring are more successful academically,” said Glenn. “… and Lynne worked very hard to expand and reinvent our tutoring services to better meet the needs of students. She managed our online tutoring and also developed an Academic Coaching program to increase the odds of success for our most vulnerable students. We appreciate all that Lynne Nadeau did to help our students succeed, and it’s my pleasure to name her director emerita of tutoring services.”