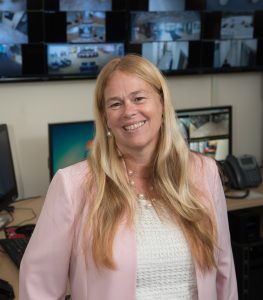 You could be forgiven if you mistook Northern Essex Community College’s new director of public safety as a student.

At five-foot nothing and dressed in plain clothes, Deborah Crafts, who prefers the moniker Chief, is accustomed to blending in seamlessly in her work environment. It is not uncommon for her to be mistaken for someone else including the “Power Point girl” and the “Girl who gets the coffee”. She doesn’t object since she makes some of her best observations while hiding in plain sight.

Though the Melrose resident is quick to shrug off such stereotypes, don’t be misled by her easy demeanor and casual style. This Chief has chops. With more than 30 years of campus policing experience, a bachelor’s degree in criminal justice from Northeastern University, and an MBA from Bentley University she has both street and classroom credibility.

With that credibility comes ideas and with ideas comes change. The biggest change, she anticipates for the NECC community is a comprehensive safety program that includes a commitment to “transparency”.

Crafts adheres to the “6 pillars of 21st century policing” one of which is building trust and legitimacy and one being community policing and crime reduction.

“People desire to know what’s going on in their community. Within the boundaries of the law it’s our job to make sure people are informed,” she said. “I will share with them what they need to know.”

Just recently, there were two incidents – one on the Lawrence campus and one near it – which Crafts was quick to report to the community via email. While these notifications will be coming more frequently, she noted, that it does not mean crime has increased.

“It simply means that as a community we are more aware of what is happening,” she wrote. “I believe in the philosophy that awareness is 90% of avoiding an incident.” Public safety is a team effort and Crafts encourages faculty, staff, and students to pick up the phone and call the public safety office at 3333 if they notice anything unusual or dial 911 if they witness a crime or have a medical emergency.

“I don’t want anyone to be afraid to call,” she said. “It’s the little things that really make a difference,” she said. “Bother us. That’s what the phone number is there for.”

Campus policing is almost unrecognizable compared to decades ago when “security guards opened doors,” Crafts said. It has undergone a metamorphosis that now includes, to a large degree, technology, and she has vigilant about keeping pace.

Crafts intends to create a public safety command center that balances the needs and wants of the community with the necessary safety measures required of a busy and diverse college campus. She wants the latest technology partnered with staff trained in everything from handling aggression to warning the community of an impending a tornado.

“I want the community to know I’m interested and mean business, but I’m human too. It won’t happen tomorrow, but it will happen,” she said.

With this in mind, Crafts will schedule “meet and greet” sessions throughout the campuses and looks forward to hearing what is on the minds of faculty, staff, and students.

The Scituate native said she was drawn to criminal justice when she was fairly young.

“I was naturally curious and a problem solver,” she said. “It was a natural progression for me to want to be a detective.”

She received sage advice early on from her parents. Advice that became her foundation as a professional.

“My mom was a teacher and taught me to see the good in everyone. My dad was the one who taught me to look beyond the people who didn’t believe in me,” she said.

Crafts believed in herself and went headlong into a male dominated field. She honed her policing skills by cycling through co-ops with the John Hancock security team and later the Northeastern Police, which, she said, was a training ground for police chiefs. To date, 14 of the individuals she worked with have gone on to become municipal or campus police chiefs.

Crafts followed one of her mentors to Bentley University where she was tasked with integrating technology into the campus’s public safety department. A few years in, she realized she needed investigative experience. So, for a time she worked as an internal investigator for Fidelity Investments. Though her heart was in public service, she said she gained valuable wisdom working in a for-profit business environment. Eventually she returned to Bentley University where as part of her duties as lieutenant she “created and deployed a community policing team.”

During her years at Bentley Crafts rose from dispatcher to lieutenant. And, along the way learned she was adept at relationship building with a smile. During this time, she married and had two sons who are now teens. As a mom, a wife, and a daughter, Crafts said, she recognizes she has the ability to carry a soft voice into a tense situation if necessary.

After introducing initiatives as benign as ice cream socials and as intense as sexual assault training, Crafts left for Simmons College in Boston where she served as second in command. Her team designed and created a comprehensive public safety plan. In addition, she began training with FEMA on large-scale crisis response. She also created a 40-hour course to train campus officers in crime prevention and campus policing. Officers throughout the state have completed that course. Crafts was honored with two professional awards for the course design.

Her brand of policing was noticed and when Massachusetts Bay Community College was looking for an interim manager of public safety, they recruited Crafts. Eventually she became MassBay’s deputy director of public safety.

Her resume expanded still, when she became police chief of Fisher College in Boston’s Back Bay. Because of its close proximity to the Boston Common, Fisher is an important partner in the planning of the July 4th celebration on the Esplanade. By extension, Crafts said, she gained “a tremendous amount of knowledge for a large scale event and potential associated threats.”

While her titles have changed with the campuses, Crafts said her commitment to campus safety has grown.

“I remember reading the job description for this position and thinking it I were selected it would be the best job ever,” she said. “It was as if it was written for me. I worked my way through every position in a police department. I’ve worked really hard to get here. I don’t take my position lightly.”

For additional information, Crafts can be contacted directly at dcrafts@necc.mass.edu