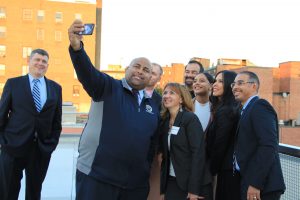 Lawrence Mayor Dan Rivera captures a selfie with guests at the reception for new Lawrence superintendent Cynthia Paris (second from right in photo).

The reception was held on the rooftop of the college’s El-Hefni Allied Health & Technology Center in downtown Lawrence on a beautiful, unseasonably warm fall evening.

Mayor Rivera earned a laugh when he said “I thought the hardest thing I was going to have to do this year was hire a superintendent.”

The mayor and the city were blindsided four weeks ago by a series of gas explosions which have left many in the city homeless or without power in their homes. 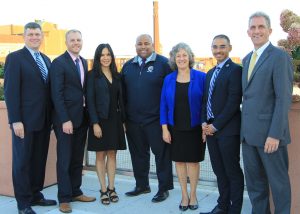 In her remarks, Paris said “Crisis has accelerated my understanding of the wonderful people in this community.  People are genuine and committed and I’m smitten with this city.”

John Connolly, who oversees the board that hired Paris, said there were several factors that were considered during the hiring process.  The committee was looking for a superintendent who is bilingual, which Paris is, and someone who understands the challenges of nonnative English speakers.  “Cynthia was an English language learner herself, and she successfully turned around a school for English language learners in Boston.”

Prior to taking on this new position, Paris had been assistant superintendent of schools in Newton, MA since 2014.  Before that, she spent 17 years working in the Boston schools system, the first 13 as a speech-language pathologist, two years as a turnaround principal at William Blackstone Elementary School, and two years at the Curtis Guild Elementary School.

The event celebrated the collaborative approach to education in Lawrence.  “Lawrence is a special place,” said Mitchell.  “We have collective leadership in Lawrence that is exceptional.  We understand the culture of collaboration, and we will create a model for other communities like ours.