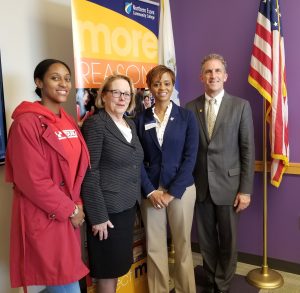 Enacted in 2012 by President Barack Obama, DACA allows some individuals, who were brought to the U.S. illegally as children, to receive a renewable two-year period of deferred action from deportation and become eligible for a work permit in the U.S.

President Donald Trump rescinded DACA in the fall of 2017, and, in January, the court intervened, ordering the resumption of DACA renewals.  Right now, DACA is “in a static place”, according to Tsongas.  “No new DACA applicants are being processed.”

Sponsored by NECC Civic Engagement and Service Learning, Student Government Association, and the Global Politics Club, the forum was designed to provide students with up-to-date information on DACA.  Close to 100 students attended and several bravely shared their personal stories. 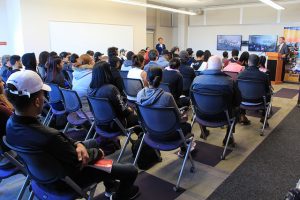 Laudys Disla, a criminal justice major at Northern Essex, came to this country from the Dominican Republic with her family when she was five.   A high school graduate, her dream is to attend the police academy.  Since DACA students are not eligible for financial aid and must pay out-of-state tuition, affording her college education is a challenge.  “I believe in my dreams and the power of education,” she said.  “I’m on the road to success.  I want to stay positive and share my story.”

Tsongas gave an overview of the history of DACA and also advocated for a comprehensive immigration package that creates a path to citizenship.

She shared the story of her late husband Paul Tsongas, who served in both the U.S. House and Senate, to illustrate the contributions immigrants can make to this country.  “Paul’s parents were immigrants from Greece, and their son went on to run for president of this country, all due to the educational opportunities he received.” 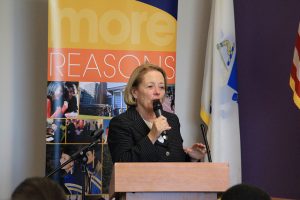 Northern Essex President Lane Glenn, who opened the forum and emceed the event, said, “We are a nation of immigrants and a city of immigrants.”

At Northern Essex, nearly 40 percent of the student body is Hispanic, and the college was the first in New England named a Hispanic Serving Institution (HIS), a federal designation for colleges with an enrollment that is 25% or more Hispanic.

Two representatives from the Northeast Justice Center were available at the forum to offer legal resources for students navigating immigration laws.  They invited students with questions to contact them by calling 978 458-1465 or visiting their website and filling out an online request form.

Wanda P. Ortiz, a constituent services representative for Tsongas, also attended the forum and is also available to field questions about DACA and other immigration issues.  She can be reached at 978- 459-0101 or wanda.ortiz@mail.house.gov.