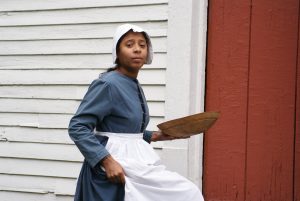 One Northern Essex Community College student, Aileen Corniel of Lawrence, and two alumni, Noah Greenstein of Boxford and Geehae Moon of Newton, NH, have roles on stage and off in the new play “Saltonstall: One Man’s Stand Against the Salem Witch Trials,” to be performed Nov. 1 through Nov. 4 at the college.

Produced by the nonprofit Punctuate4 Productions, the play is a cooperative effort that includes Buttonwoods Museum, Haverhill Cultural Council, and Northern Essex. It will be presented in the Chester Hawrylciw Theater on the third floor of the Spurk Building on the Haverhill campus, 100 Elliott St., Nov 1, 2, & 3 at 7:30 p.m. and Nov. 3 & 4 at 3 p.m.

Written by playwright and attorney Michael Cormier of Atkinson, NH, and director/author Myriam Cyr, of Beverly, the work portrays real life judge Nathaniel Saltonstall, a distinguished Haverhill judge who was invited to sit on the court where he stood against the formidable Judge Stoughton. Saltonstall was the only judge to recuse himself from the Salem Witch Trials. The play explores the conflict, personal struggle, and ethical challenges of a man determined to save his family as well as the entire colony from “a wave so big, it will drown us all.” 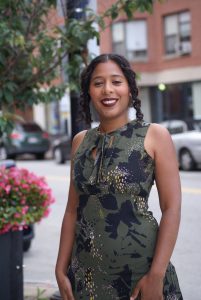 Aileen Corniel was encouraged to audition for the role of Goody Cooper by NECC alumnus and fellow actor Noah Greenstein.

Corniel, who is studying liberal arts, will portray Goody Cooper as well as the minor role of Martha, while Greenstein plays a gaoler and Moon is the play’s lighting director. Corniel, has taken theater classes with theater program coordinator Brianne Beatrice, who she credits with preparing her to audition for roles beyond Northern Essex. She was encouraged to audition for Punctuate4 Productions, which cast a wide regional net for actors.

Despite a diagnosis of Lyme Disease, which nearly incapacitated her this July, Corniel persisted. The audition process was not “as scary as I expected,” she admits. Cyr, the director, was both “welcoming and helpful,” she said.

A member of NECC’s Top Notch Players, Corniel said, “My stage experience at NECC has been important, but Saltonstall has opened a whole new world for me,’ she said. “The creative and sharing experience has been amazing. It is not easy. The expectations are very high, but I am learning so much from the director and other cast members. I can’t wait to be part of the performances at NECC this fall.”

For additional information on the play, “Saltonstall” contact Linda Greenstein at Linda7315@verizon.net