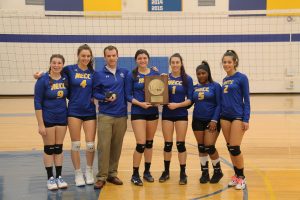 The Northern Essex Community College volleyball team swept its way past both MassBay Community College and Bunker Hill Community College on Saturday afternoon to claim the programs seventh Region 21 Championship. With the win the Knights will advance to the District Tournament to be played next weekend at a site and time to be determined.

In the second and deciding match against Bunker Hill, the Knights won with set scores of 25-11, 25-13 and 25-13. Sarah Shattuck  of Andover led the attack driving down 12 kills to go along with two service aces and three blocks at the net. Rachel Amiss of Salem, NH also recorded eight kills to help propel the offense.

For the match, the Knights served up 16 service aces with Marissa Reardon of Lawrence leading the way with five. Nashaly Sanchez of Lawrence handed out 26 assists for the match. On the defensive side of the ball Amanda Forgetta of Mallabar, FL,  had 11 digs in the match.

Shattuck and Amiss again led the offense in the opening match as they recorded nine and seven kills respectively.

Behind the service line Reardon recorded 10 aces, while in the third set, Amiss served 16 consecutive points to close out the match for the Knights.