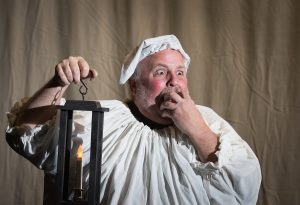 Tom Whateley of North Berwick, Maine, will play “Scrooge” in this year’s production of A Christmas Carol.

Once again, Northern Essex Community College will present the Charles Dickens’ classic “A Christmas Carol” in the Chester Hawrylciw Theater, on the third floor of the Spurk Building on the Haverhill Campus, 100 Elliott St. This year’s performance will take place the weekend of Dec. 7-9.

Ebenezer Scrooge, the Ghost of Christmas Past, the Cratchit Family, and all other Dickens characters will come to life in this year’s play, adding fun and tradition to the holiday season.

A special feature of this production is the four madrigal singers who appear throughout the play singing traditional carols.  NECC music professor Alisa Bucchiere will lead the madrigals.

Bucchiere of Merrimac will direct the production along with John Budzyna of Newburyport.  Actor and director Tom Whately of North Berwick, Maine will play the role of Scrooge.

Whateley will celebrate his 47th year in theater this year, having worked at the Carousel Dinner Theater in Ohio, The Shawnee Playhouse in Pennsylvania, and Nick’s Comedy Stop in Boston, and The Cooperstown Theater Festival in upstate New York, to name some. He also directed several shows including the 2014 World Premiere of a new Christian Rock Opera the Bus Stop Atheist at Merrill Auditorium in Portland, Maine.

Tickets will be available at the door, although seating is limited. They can also be purchased through MKTIX.org

The NECC production was originally presented as a one-time fundraiser for the performing arts department by now retired husband and wife NECC Professors Jim Murphy and Susan Sanders. The play was so successful, it became an NECC community event each holiday season with faculty, staff, students, and their family members auditioning for roles.