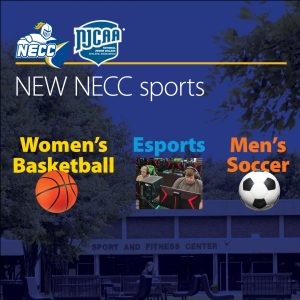 Northern Essex Community College is pleased to announce the addition of three new varsity athletic programs for the 2019-20 academic year. Both the men’s soccer and women’s basketball teams will return to the college, while NECC will have a varsity eSports program for the first time.

Men’s soccer and women’s basketball will compete in NJCAA Region XXI, becoming the 10th men’s soccer playing institution and  the 12th women’s basketball program within the region. The eSports program will join the National Association of Collegiate Esports (NACE) as it serves as the governing body for esports at the collegiate level and for all NJCAA members.

“We are excited about bringing both men’s soccer and women’s basketball back to the college. The addition of eSports will open up an entire world of college athletics for gamers here at NECC. We look forward to competing at a high level and allowing more students to succeed both academically and athletically while they pursue their degrees,” said NECC’s Director of Athletics Dan Blair.

NECC last fielded a soccer program in the mid 1990’s, while the women’s basketball program previously has won two NJCAA Region XXI Championships in 1994 and 2001.

Esports is a multi-player video game program that competes with college and universities throughout the country. All are online multi-player games and student-athletes will compete as a team to defeat opposing institutions. The growing eSports industry is a multi-million business with companies developing, testing and publishing games.

With the addition of the golf program for the 2018-2019 academic year and growth across all of NECC’s other athletic programs, the college has nearly doubled its student-athlete population since the start of the 2016-17 academic year from 43 to 90 athletes.

Coaching searches for the soccer and basketball programs will commence immediately. NECC alum and nationally ranked Fortnite gamer RJ Warnock will lead the eSports program as its first coach.  Warnock of North Reading played baseball for Northern Essex before transferring in 2013.