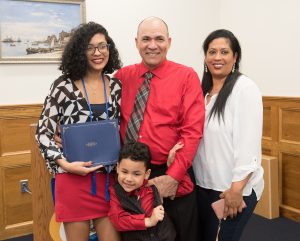 As a participant in the NECC/Lawrence HS Early College Program, Marielis Almanzar earned six credits while in high school. She is now a sophomore at Northern Essex. She is shown with her parents Jose and Edilburga Almanzar and her nephew Dyland Alvarez.

Northern Essex’s Early College partnership with the Lawrence Public Schools is one of only nine programs across the state to receive the official seal of approval at the state level.

The partnership was recently granted official designation status by the Baker-Polito administration after a rigorous one-year selection process.  As a result, the college has received a $140,000 implementation grant.

Early College programs combine traditional high school classes with college courses through a local public college or university to give high school students knowledge and exposure to an area of study, while earning up to 12 college credits – equivalent to one semester ­- for free.

“Boosting the number of early college programs in the Commonwealth is a priority for our administration that will provide more students with an opportunity to attend and complete college,” Governor Charlie Baker said. “Exposing high school students to college courses in a field that interests them, and offering college credits at no cost, will make the transition to college easier and better prepare many students for successful careers following their education.”

In addition to Northern Essex, Merrimack College’s partnership with Lawrence Public Schools was selected as an officially designated program.

Marielis Almanzar, a 2017 graduate of Lawrence High School, was part of the first group of students to graduate with Early College credits.  She graduated from high school with six college credits, and is currently enrolled in the Liberal Arts Program: Psychology option at Northern Essex with plans to transfer to UMass Boston or UMass Amherst after earning her associate degree.

Almanzar came to Lawrence from the Dominican Republic as a teenager, speaking no English.  She spent two years in the International Academy at Lawrence High School and then transferred to the Math, Science, and Technology Academy.

“Taking college courses in high school, better prepared me to succeed in college,” she says.  “This program has helped me understand responsibilities and how to be a college student.

“Our Early College programs help students like Marielis to prepare for college-level work while they’re still in high school,” said Lane Glenn, president of Northern Essex Community College.  “We are thrilled with this state recognition, which confirms we’re on the right track and also gives us additional resources to build the program.”

“We expect to have 300 students in the spring and an additional 30 students in the summer session,” said Noemi Custodia-Lora, who as vice president of Lawrence Campus & community relations oversees K-12 programs for the college.