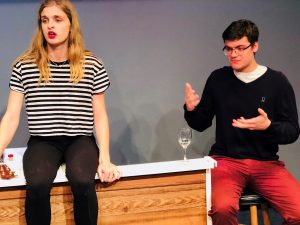 The Northern Essex adaptation of the Aaron Posner play, which explores love, art, and revolution, will be performed at 1 and 5 p.m. It is co-directed by Brianne Beatrice, Northern Essex theater professor and advisor to the NECC Topnotch Players, the college’s student theater group, and NECC student Sarah Durning of North Andover. The play is an irreverent, contemporary, and very funny remix of Chekhov’s “The Seagull.”

“Highly competitive, being invited to Festival is an outrageous step for Northern Essex Community College and our Theater Program,” said Beatrice.

Each year between 30 and 40 schools submit a production and two or three are invited to perform, said Beatrice. Months ago, NECC submitted the “Stupid F*cking Bird” to be viewed. The final decision was made in early December to invite the NECC production to Festival.

“In January, at festival, our production will perform for all university theater programs in Region I and there will be a response by a representative from the Kennedy Center,” said Beatrice.

If the production excels in the Region I Festival, it is hoped the show will go to Washington, DC, in May, Beatrice said.