MiLB Player Says NECC had Role in His Success 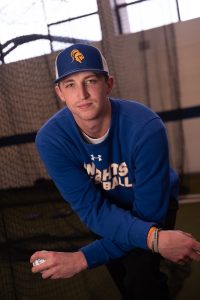 Ryan McAuliffe credits NECC with starting him on his path to an MiLB career.

Ryan McAuliffe, a Northern Essex Community College alumnus turned minor league baseball player, is utterly effusive when he talks about the two years he spent as an NECC Knight.

McAuliffe was a right-handed pitcher fresh out of North Reading High School when he enrolled at Northern Essex at the urging of NECC baseball coach Jeff Mejia. With a dose of humility, McAuliffe said he was “a pretty good pitcher…nothing special”. Although his record would state otherwise. His junior year, his team won the state championship under Frank Carey, the state’s winningest high school baseball coach.

As strong as McAuliffe was on the field, and although he never missed a day of school, his grades weren’t impressive. Thus, his college prospects were slim. With encouragement from Mejia, who also co-founded the Team Boston Academy, where McAuliffe played elite baseball, he enrolled at Northern Essex and brought a few of his closest friends with him.

“I was just a tall, lanky…scrawny kid when I started here,” he said. “I got bigger, and 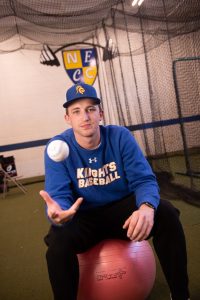 smarter. I increased my velocity, I understood the game better, and I saved thousands of dollars all while earning an associate degree with some of my closest friends.”

When McAuliffe was younger, he often dreamed of playing Division 1 baseball, but had no direction. It turns out; Northern Essex was the road map he needed. One of the many benefits of attending a community college or junior college or “JuCo” as McAuliffe said it’s called, is that you play a lot of baseball. That translated into good baseball, which got him noticed by D1 Schools including St. John’s University in New York.

One of the many rules of D1 teams is that transfer students must transfer in with an associate degree and hold at least a 3.0 GPA. For MCauliffe the academic heat was on. While balancing school, baseball, and three part-time jobs, McAuliffe quickly became a master of time management. He also took full advantage of the tutoring centers and was a familiar face with the NECC librarians.

His efforts earned him a scholarship to St. John’s. He graduated from NECC in 2015 with an associate degree in general studies. He graduated from St. John’s in 2017 with a Bachelor of Science in Sport Management. He signed with the New York Mets organization just a few months later. The 23-year-old North Reading resident played on the organization’s minor league team and has been on the disabled list since May when he was struck in the leg by an errant baseball.

As a community college graduate, McAuliffe found he wasn’t the exception, but rather the norm.

“Every D1 roster had six or seven guys from JuCo,” he said. “Coaches love players from two-year colleges because they have grit and the desire to play and get better.”

“Northern Essex was everything,” he said. “I would come back here in a second if I had to relive it.”

NECC is enrolling now for the spring semester, which starts January 23.  To learn more, visit the website  or contact enrollment services, admissions@necc.mass.edu or 978 556-3700.