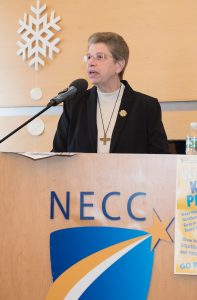 With an eye to the future, Northern Essex launched the new semester with spring convocation Tuesday, January 22, in the Hartleb Technology Center on the Haverhill campus 100 Elliott St.

“NECC 2020: New Ways of Seeing” was the theme of the morning with a heavy focus on the upcoming New England Commission of Higher Education (NECHE) accreditation.

After introducing new hires, announcing retirements, and congratulating the NISOD recipients, President Lane Glenn introduced Linda Rohrer, director of MassHire Merrimack Valley Career Center, formally known as ValleyWorks Career Center. Northern Essex has managed the career center since spring of 2017. It now has locations in Haverhill and Lawrence. With the motto “Let’s Get to Work,” MassHire serves is a comprehensive career center that provides a wide range of services to job seekers and businesses, youth to adults in the Merrimack Valley. 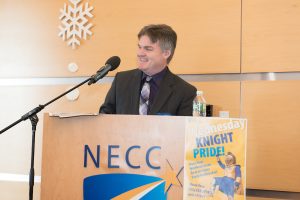 Jeff Bickford, NECC’s chief information officer, reported on recent phishing issues. “There is no technology to block phishing. Phishing is the highest risk we have at Northern Essex,” he said. As a result of educating faculty, staff, and students to phishing tactics, Bickford said NECC has gone three months without a phishing breach. He encouraged all who use email to be vigilant and not hesitate to forward suspicious emails or links to phishing@necc.mass.edu.

Karen Hruska, NECC’s director of counseling, and Janet D’Agata-Lynch, coordinator of community resources, reminded everyone of Northern Essex’s free food resources including the monthly farmer’s market and peanut butter, non-nut butter, and jelly sandwich stations set up around campus. The stations are possible thanks to bread donations by Fantini’s Bakery and jellies from R. E. Kimball & Co in Amesbury. To date more than 26,000 lbs of produce were delivered this fall, with each shopper receiving 20 to 25 lbs. The next markets will be January 29, February 26, March 26, and April 23. In addition, more than 200 frozen smart meals have been served. Smart meals are created from prepared foods donated by institutions. The meals are packaged to individual portions and frozen.

He introduced Patricia O’Brien, SND, who is senior vice president of NECHE. The accreditation process she said is all about looking and moving forward. She outlined the steps NECC will be completing during the next 18 months. For additional information on the accreditation go to the dedicated NECC page.

“Consider accreditation a vote of confidence,” she said. “You’re good today. You will be better tomorrow.” 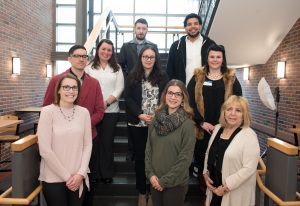 Dr. Patricia Machado, Judith Pollock-Ciampi, Mark Clements, Alicia Iola, Paula Richards are the 2018-2019 nominees for the National Institute for Staff and Organizational Development (NISOD) Award which will be presented at the annual NISOD meeting in May. 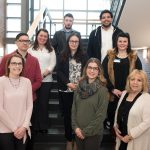 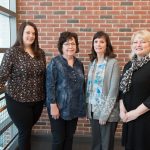 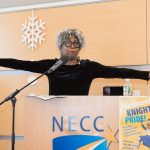 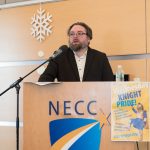 Scott Lancaster talks about the accreditation. 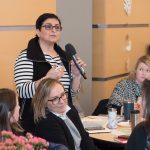 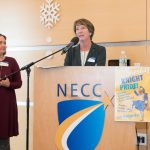 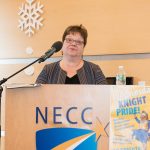 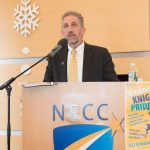 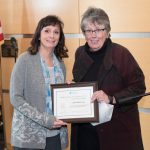 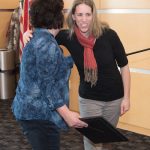 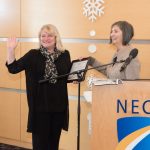 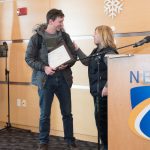 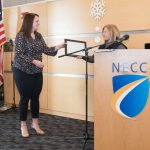