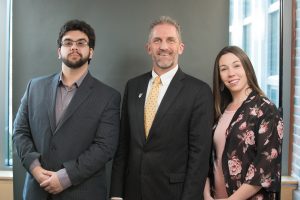 The two are part of a group of community college students from across Massachusetts selected for the team based on their academic record and recommendations from their professors.

“Both nominees came to the college with a strong sense of independence and confidence to achieve and develop their potential and talents, while serving their peers and communities,” said Lis Espinoza, NECC English professor.

Steevie Litchfield-Groves, a graduate of Memorial High School in Billerica, is a psychology major at NECC. After enrolling at Northern Essex, she joined the Community Outreach Group (COG) and was elected president of the student club. Committed to serving her community, she also has excelled in her academics. She has a 3.9 GPA.

Following her graduation from NECC she hopes to transfer to a nearby four-year college or university while continuing to work as a licensed alcohol drug abuse counselor (LADC). Her long-term goals include opening a small, family practice where she combines health and wellness for the mind, body and spirit for local youths and young adults.

Romero, a graduate of Newburyport High School, is a biology major. He grew-up in several parts of the Merrimack Valley, Boston, and New York. He is part of a diverse family that moved frequently. His father is from Honduras and his mother is of French-Canadian descent. He taught himself to read and write which motivated him to continue in higher education. As a student at NECC, Romero has developed his potential. He is applying to four-year colleges and universities to study molecular biology and business administration, which will bring him closer to becoming a molecular biologist and research director. He holds a 3.73 GPA. While at Northern Essex, Romero has been a peer tutor for organic chemistry.

They will be honored in a ceremony at the Massachusetts State House this spring.