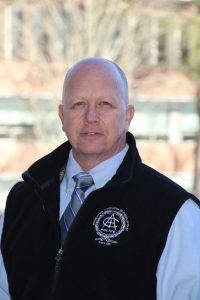 Scippa, who was appointed Stratham Chief of Police in 2009, oversaw 12 full-time employees and an operating budget of $1.4 million. For five years prior to that, he served as lieutenant executive officer for the North Hampton, NH, police department. From 1998 to 2004, he was a law enforcement training specialist for the New Hampshire Police Standards and Training in Concord, NH.

“During my law enforcement career in New Hampshire, I always considered my time as a training specialist at the NH Police Academy to have been very rewarding and purposeful,” Scippa said. “I consider training police officers to be a privilege and I’m excited to be back in the police-training environment at Northern Essex.”

The Exeter, NH, resident earned a Bachelor of Arts in Sociology from the University of New Hampshire and a Master of Science in Law Enforcement Administration from Western New England University.

The Northern Essex/Methuen Police Academy has graduated four classes since its inception in January of 2015. To date, more than 400 recruits have graduated from the academy, serving 52 municipal police departments, eight colleges and universities, Massachusetts Port Authority, and the Somerville Housing Authority. The largest class of 77 graduated in September of 2018. The next class will graduate in April of 2019.

All the graduates complete an intensive 24-week program that includes constitutional law, prevention and intervention, community policing, domestic violence, elder abuse, and victims’ rights, and other topics. The recruits undergo 900 hours of training, defensive driving, daily physical fitness training, and firearms training. All training takes place on the Haverhill Campus except for firearms training and emergency driving techniques, which are held, at off-campus locations.

Northern Essex manages the academy with guidance from an advisory board that includes police chiefs from Amesbury, Haverhill, Methuen, Lawrence, and North Andover.

“The addition of John Scippa to the Academy strengthens an already tremendous partnership between the police chiefs and Northern Essex Community College to provide professional police recruit training in Massachusetts,” said Lawrence Police Chief Roy Vasquez. “John brings an incredible amount of experience and expertise in the area of training and I look forward to working with him.”

The academy opened in response to a shortage of academies in the area. At that time, Haverhill Police Chief Alan DeNaro, said the Merrimack Valley has needed a regional police academy for more than 25 years.

“By partnering with NECC, we are able to move quickly and efficiently to train our new recruits as they embark on their chosen profession,” DeNaro said.

“We can’t eliminate the incidents of violence that have taken place across the country, but better training can help reduce those incidents,” Glenn said.

They can also help provide a safer campus, said Glenn.  “Academies provide a very visible police presence and can be comforting and an effective deterrent to crime.”

Glenn said that future goals included adding a credit component to the academies, allowing recruits in the academies to earn college credits and work toward an associate degree.