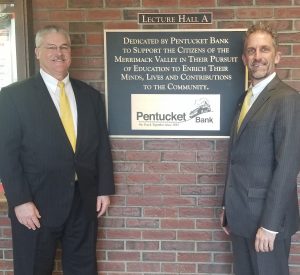 Lecture Hall A has been the name of the two-story lecture hall in the Spurk Building on Northern Essex Community College’s Haverhill Campus ever since the college’s Elliott Street campus opened in 1971.

With the dedication of two new plaques last week, it will now be called the Pentucket Bank Lecture Hall.  The Pentucket Bank Charitable Foundation made a $50,000 gift to the college to rename the 158-seat lecture hall.

“We are deeply honored and grateful to have community partners like Pentucket Bank who are committed to ensuring the success of our students,” said Jean Poth, vice president of NECC’s institutional advancement and executive director of the NECC Foundation.

“We are happy to support Northern Essex, which is so critical to enhancing the education and economic well-being of the Merrimack Valley and Southern New Hampshire,” said Scott Cote, chief executive officer of Pentucket Bank.

Pentucket’s recent gift is another example of Pentucket Bank’s support of Northern Essex said Poth. She noted the Pentucket Bank endowed scholarship as well as its sponsorship for NECC’s September Signature Fundraising Events.

“We can always count on Pentucket Bank to support Northern Essex, its mission, and its students,” Poth said. ”Our Lecture Hall A is a valuable center of learning. It is used by both students and community members.”