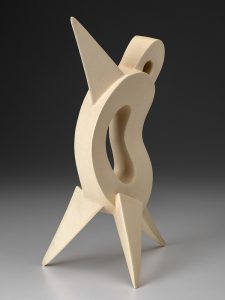 Renowned ceramicist Immer Cook of Massachusetts will exhibit more than a dozen new ceramic works in an exhibit at Northern Essex Community College’s Linda Hummel-Shea ArtSpace in the Harold Bentley Library on the Haverhill campus, 100 Elliott St., beginning Monday, March 4. There will be an opening reception Thursday, March 7, from 3:30 to 5:30 p.m. The show will run until April 5.

A native and resident of East Hampton, Massachusetts, Cook attended the old Bradford College where he first crossed paths with Northern Essex and then Bradford art professor Marc Mannheimer, who now coordinates the ArtSpace Gallery.

“I have long admired his work in ceramics,” said Mannheimer. ““Immer was a student of the late Marvin Sweet, a master ceramic artist who also taught at Bradford.  Immer’s work has a similar focus and amazing craftsmanship that I always admired in Marvin’s work.” 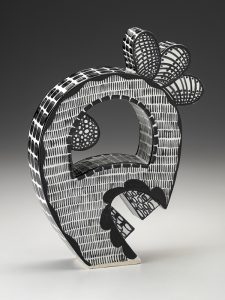 Another untitled ceramic work by Cook.

“One is vessel-centric, both functional and non-functional,” Cook said. “Its roots are a series of drawings I created while between clay studios. The second series is figurative and emerged from the process of constructing the vessel series.”

Cook’s artistic journey began with the study of modern dance. He performed in numerous pieces for the Bradford College Dance Company as well as for the Movement Theater Company in Boston. Although he transitioned to ceramic sculpture as his preferred medium, dance has remained a prime influence.

He regularly creates ceramic sculptures at various studios in Western Massachusetts and the Pioneer Valley where he has found a lively ceramics community. For a while, he produced slip cast, hand painted porcelain tableware. He is currently creating at Cycle Pottery, a group studio and learning space.

Cook spends his summers gardening and building stone patios and walls for a small landscaping company where he has worked for the last six years.

For additional information on the exhibit or the Linda Hummel-Shea ArtSpace contact Mannheimer at mmannheimer@necc.mass.edu

Northern Essex offers an associate degree in general studies: art and design. Students can focus on Fine Art, Graphic Design, Photography, Multi-media & Interactive design. They are prepared for transfer to a four-year art program after completing their Associates at NECC, or for work in their chosen field