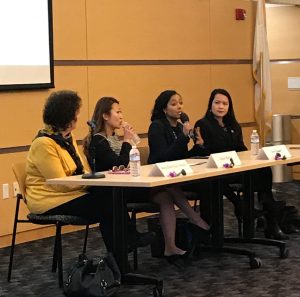 The women were introduced, by NECC President Lane Glenn, to a standing-room only crowd gathered in the Hartleb Technology Center. The women participated in a panel discussion prompted with questions delivered by Karen Hruska, NECC’s director of counseling.

Each shared segments of their personal journey of venturing into politics. Daly O’Brien, an 18-year, sitting Haverhill City Councilor, registered nurse, and past NECC board member, said the best advice she received when thinking of entering politics was from her father who told her to be quick to make her point. To this day, she said, she listens to what others says and is thoughtful in what she says.

She says her years of nursing and being a mom to four women has taught its own lessons. 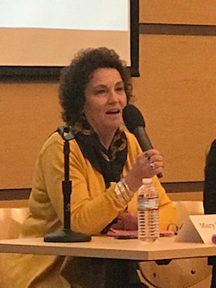 “When I was first elected I served several terms as the only female. You feel it. You are the diversity,” she said. “My success in that career (nursing) helped me in so many ways to be better.

Malone, a vice president at Enterprise Bank, ran unsuccessfully for the 3rd Congressional District seat last fall. A Cambodian refugee who came to the United States when she was 9 years old, said, “I am blessed to have this amazing American life.”

If she had been told as a child refugee that she would one day be a bank vice president and run for congress she wouldn’t have believed it, she said. She credits her parents who taught her and her siblings persistence and perseverance. She grew up in Lynn in a neighborhood where violence and teen pregnancy were the norm. As a teen, she said, she was often lonely and depressed.

While in high school she discovered Girls Inc. where she found women mentors who, she said, “saw the potential in me that I didn’t see in myself.” She was encouraged to take “smart risks” like pursuing a bachelor’s and later a master’s degree.

Her accomplishments allowed Malone to return to Cambodia where she a spent a year and created an informal school for children. She credits Enterprise Bank with supporting her many decisions to grow personally and professionally including running for office.

Giving back is important to her.

“If we lift everyone up…then we will all do better,” she said.

“Even though I didn’t win (the Congressional seat), it was one of the most rewarding things I have ever done in my life,” she offered.

Matias, who also immigrated with her family to the United States as a child, said she learned early “you can’t be what you don’t see”. What she didn’t see was women of color at the state house, so she ran and became a Massachusetts State Representative for the 16th Essex District. She also ran unsuccessfully for the 3rd Congressional District. She is an attorney who was recently appointed chief operating officer of MassINC, where she had been a member of the board of directors.

Her parents, who were both educated, were happy to work factory jobs so their children could succeed, she said. In 2015 she decided to no longer “sit on the sidelines”. “Our district deserved a qualified advocate,” she said. She was proud to be only one of two women of color in the legislature.

“Regardless of where you’re going, it’s very easy to give back,” she said. “What drove me as a working class woman of color, was no one is ever going to hand you a seat at the table. You need to have the want and the strength to make it happen,” she said.

She was prouder still, she said, to call herself a “public servant and not a politician”.

Nguyen, the current sitting state representative for the 18th Essex District was also a child refugee. The oldest of three girls, her parents had just $100 when they arrived. She never considered running for political office, she said, until she witnessed the Women’s March on Washington, D.C., and the Time’s Up and #metoo movements.

The first in her family to attend college, she also attended law school. As a legal aid attorney, she decided to run for office, she said, because she felt she had no choice when her own representative refused to meet with her for two years.

How do they “balance for better” being working women, wives, moms, daughters?

“Find the time to prioritize what is important to you and you will find the time,” said Nguyen.

Matias said she has learned that it is ok “to say no”.

“I didn’t get where I am today alone.” Malone said. She had a lot people supporting her along the way as a community activist, wife and mother.

“When you are used to being a perfectionist, you learn it’s ok for everything not to be perfect. It’s okay to not have a perfect day. It’s a learning process.”

By the time she went into politics, Daly O’Brien said she had already learned about balance because she worked full time, raised four children and has a husband who traveled.

“Finding balance is something you learn,” she said.