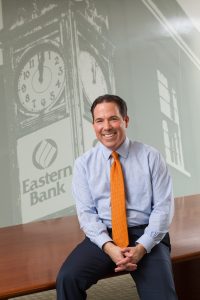 On Saturday, May 18, Bob Rivers, chair and CEO of Eastern Bank, will be the featured speaker at Northern Essex Community College’s 57th annual commencement ceremony, which will be held beginning at 11 am on the Haverhill Campus. In addition to leading Eastern Bank, America’s oldest and largest mutual bank and the largest independent community bank headquartered in Massachusetts with $11 billion in assets, Bob is a leader of social justice and sustainability causes, and an advocate for a more inclusive community.

“I have long been an admirer of Bob, his story, and the incredible community building and economic development work—centered in principles of social justice—that he and Eastern Bank have been doing locally and regionally,” said Lane Glenn, president of Northern Essex.  “He’s been a strong supporter of community colleges and our mission, and he will be the perfect speaker for our grads.”

Rivers, a 37-year community banker who started his career as a teller and bank janitor in his hometown of Stoughton, believes that doing what’s right and smart means building a strong business that does good things to help people prosper. Under his leadership, Eastern has delivered record financial results while carrying out the principles of community service, philanthropy and advocacy. Eastern’s growth and financial success enable it to provide greater contribution to area nonprofits as well as increasing resources to better serve its customers and strengthen the local economy. As a community bank, Eastern’s success is directly linked to the strength of the communities it serves. It regularly invests in underrepresented and underserved communities and has locations in 12 of the 26 “Gateway Cities,” including Lawrence where in 2011 Eastern opened the first full-service banking office in the community in more than two decades.

During River’s tenure as CEO, Eastern has been a leading voice in the business community in support of equal opportunity for all, including on the successful Yes On 3 transgender rights ballot initiative in Massachusetts, the advancement of women, and the growth of minority-owned businesses. Since 1999, Eastern has donated an average of 10% of its net income to local charities and its outspoken advocacy and community support have exceeded more than $120 million in charitable giving. In Lawrence and Haverhill, Eastern has given more than $550,000 to nonprofits in those communities in the past five years alone and made a $100,000 grant in 2018 to “The Leading Into the Future Together (LIFT)” campaign for Northern Essex Community College. Bob is also a co-founder of the Lawrence Partnership, the private-public sector collaboration focused on accelerating economic development and improving the quality of life in Lawrence.

In addition to his work at Eastern, Rivers serves on the Boards of many nonprofits across the state, including as Chair of the Massachusetts Business Roundtable and The Dimock Center. His extensive involvement in the community also includes serving on the Board of Directors of The Lowell Plan, the Greater Boston Chamber of Commerce and Jobs for Mass. He is a member of the Board of Trustees of Stonehill College, the Board of Corporators of Lowell General Hospital, the Advisory Boards of the Lawrence Partnership and JFK Library Foundation, and is a member of the Boston Women’s Workforce Council. Rivers has been named among the Top 10 “Most Influential People in Boston” by Boston Magazine, and to the Boston Business Journal Power 50 list for the last three years. He has been recognized by many organizations for his work in championing diversity and social justice, including The Boston Globe, The Partnership, Get Konnected!, Color Magazine, the Massachusetts Immigrant and Refugee Advocacy Coalition (MIRA), the Asian American Civic Association (AACA), Association of Latino Professionals For America (ALPFA), El Planeta, the Massachusetts Transgender Political Coalition, The Theater Offensive, and MassINC.

With campuses in Haverhill and Lawrence, Northern Essex Community College offers over 60 associate degree and certificate programs as well as hundreds of noncredit courses designed for personal enrichment and career growth.  Each year, 8,500 students are enrolled in credit associate degree and certificate programs on the Haverhill and Lawrence campuses; and another 2,600 take noncredit workforce development and community education classes on campus, and at businesses and community sites across the Merrimack Valley.  For more information, visit the website at www.necc.mass.edu.