CIS Major to be Honored at State House Ceremony 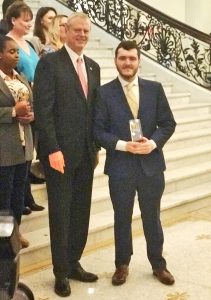 Ever since middle school, Tyler Evans knew he wanted to work with computers. So it’s no surprise that in May, he graduates with not one, but two computer science degrees from Northern Essex Community College.

What is even less of a surprise is that along the way the West Newbury resident has enthusiastically shared his knowledge with other computer fans including classmates struggling with comprehension and seniors citizens struggling with cybersecurity. On Friday, May 3, Massachusetts Governor Charlie Baker will recognize Evans for his extraordinary accomplishments and contributions at a ceremony at the State House.

Evans has been selected as one of the “29 Who Shine”, an honor which is given to a top graduate from each of the state’s community colleges and public colleges and universities.  Also recognized at the ceremony will be his mentor Adrianna Holden-Gouveia, an NECC computer information science faculty member.

“I flourished once I was in a college setting,” he said. “I was in a classroom with like- minded adults being taught by professors who cared so much about what we were doing in class.”

In addition to working on his degrees, Evans also worked, first as a supplemental instructor and then a computer science tutor. He was just a high school student when a professor recognized his acumen and recommended him for the computer science tutoring role. Evans also volunteered his time to present to Northern Essex’s College of Older Learners (CoOL) on the basics of computer security and answered their technical questions.

His enthusiasm for computers continued to spill out into the world during an internship last summer. While working for three months in the support management center in the cyber security office of the Food & Drug Administration, he designed a monitoring tool app that is still used today.

Following graduation, the 21-year-old will take his computer science transfer degree and information technology degree to UMass Lowell where he will enroll in a computer & information sciences bachelor’s degree. 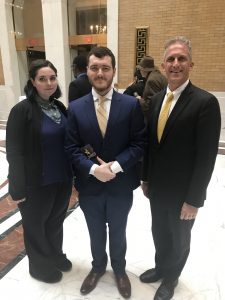 Eventually Evans hopes to return to the FDA as either a cybersecurity specialist or software designer.

“Every Professor I’ve had at NECC has left a profound impact on my development as a student and professional,” said Evans. “Among them, Adrianna always went the extra mile to sate my limitless curiosity, and ensure I was the best student I could be. I’m incredibly grateful for all she has done.”

The programs prepare students for career in computer information science or for transfer into a four-year program.