Honors Student has Rarely Been on Campus 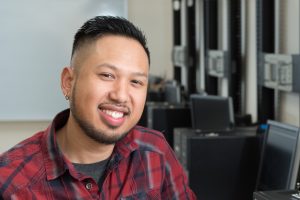 When Sarath Men of Methuen arrives at his Northern Essex Community College graduation on Saturday, May 18, it will only be the third time he has been on campus.

That’s because Men, who will earn a Test B Technician’s Certificate with high honors, took all his courses at his worksite, Raytheon Integrated Defense Systems in Andover.

That was in 2008, and, since then, 125 Raytheon employees, including Men, have gained the skills to move up in their field.  The company also has expanded the program to include a noncredit option for Test B technicians that want to prepare for higher-level Test A technician jobs, and 70 have completed that program.

Courses are offered onsite at Raytheon and the company has built classrooms for lectures, problem solving, software simulations, and an electronics lab.  Raytheon also pays for books, tuition, software, and calculators, and allows employees in the program to adjust their shifts so they can attend the classes, which run two afternoons a week for four hours for 16 weeks.

Men started at Raytheon as an assembler in 2012, and he enrolled in the program because he was looking to advance in his career.

Married with two young daughters, and, he adds, a puppy, Men admits that the program is challenging.  “We all work full-time and most of us have kids.  It’s non-stop,” he says.  “But we’ve made this commitment to go to work and better ourselves.

When in school, Men works his shift from 5:30 am to 2 pm and then starts his four hours of classes at 2:30 pm.  The evening is spent with his family and then, once his kids are in bed, he hits the books.

In January, Men was promoted to a new position, based on his enrollment in the program and an interview with company engineers.

Thirteen Raytheon employees will be awarded their certificates at the May 18 Commencement, and Men will be there with his proud family.

“I’m very appreciative of the opportunity Raytheon has given us,” says Men.  “They make it convenient to go to school.”