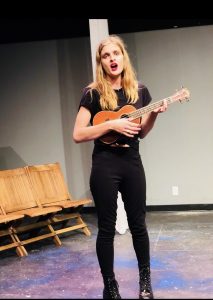 The play received the award for 2019 ‘Best Ensemble’, and NECC student Gwynnethe Glickman of Newbury was honored nationally as a ‘distinguished performer’.

Glickman is an elementary education major, who is active in the theater program at Northern Essex.

After winning the award she described feeling “Really surprised! They announced the winners about a month after the actual festival. I was shocked, I didn’t think I was going to win anything, so it was a really cool moment for me.”

NECC theater professor Brianne Beatrice said of Glickman, “Congratulations to our national award winner Gwynnethe Glickman on her award… I am crying tears of pride but I am not in the least bit surprised.” 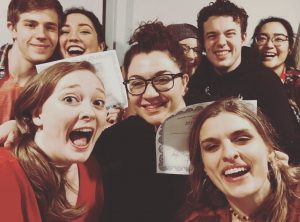 Director Brianne Beatrice and cast pose with their awards.

Glickman described her experience at the festival as, “A lot of fun, we performed the show twice at the festival. We had respondents come and watch the show. They were very supportive and gave great feedback and constructive criticism.”

The spring play at NECC “Good People” will premiere at the Top Notch Theater located on the third floor of the Spurk building on the Haverhill campus on Thursday, May 2, at 4 p.m. It will also be showing on Friday May 3, and Saturday May 4 at 7 p.m. and on Saturday May 4 and Sunday May 5 at 2 p.m.

If you are interested in becoming a Top Notch Player, contact Brianne D. Beatrice, Theater Professor, at bribeats@gmail.com, or 978-556-3275.