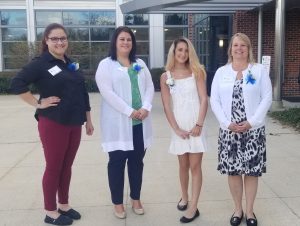 Northern Essex Community College business students were recognized for academic excellence and leadership at the 32nd annual induction and awards ceremony for the Beta Omicron Chapter of Alpha Beta Gamma, which was held recently at the college.

Thirty-one  students were inducted into the honor society and nine received awards.   Alpha Beta Gamma was established by business professors in 1970 to recognize and encourage scholarship among business and professional students enrolled at two-year degree granting institutions.

Timothy Miles, of Salisbury,  received the Hausman Siegel Distinguished Award. This award is given to the outstanding student chapter president. Miles has shown exceptional leadership in his time as chapter president.

Ruth Echavarria of Lawrence, was the recipient of the President Eva Bobrow Medallion which is given to a chapter member who has made many contributions to the society over a period of time.

The chapter itself also won an award; the Brooks College Golden Key. This chapter award is given to two year colleges for excellence in community service, campus service, recruitment, and excellence in financial management. This is the ninth year Northern Essex has won this award. Throughout its chapter history, Alpha Beta Gamma has received over 98 national awards.

The following students were inducted into Alpha Beta Gamma this year: 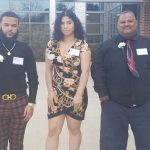 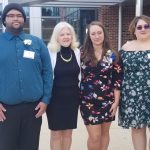 From left to right: Rory Astacio of Haverhill, Professor Pam Donahue, Erin Thibodeau of Merrimac, and Renee Pearson of Salisbury. 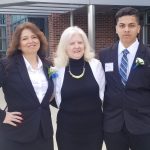