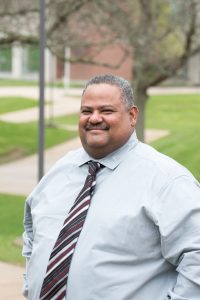 Luis Estevez worked at Malden Mills for 28 years before having the opportunity to enroll at NECC.

This dedicated employee, waited until his employer closed its doors before he took advantage of a retraining act that made it possible for him to earn a long sought-after college degree.

At 48 years old, the Lawrence resident will cross the stage on Saturday, May 18, and finally accept his diploma. However, make no mistake. He isn’t finished yet. Estevez intends to earn his bachelor’s degree before he is 50 or shortly thereafter.

The Dominican Republic native was 16 when he and his family immigrated to the United States. He enrolled at Lawrence High School – graduating in 1989. He went directly from school to work at Malden Mills and was happy to do so. For nearly 28 years, through a marriage and four children, he reported to work growing his way from union employee to technical staff to supervisor.

“I am very grateful to have been a leader for that company,” he said.

By the time the Lawrence company shuttered its operations, Estevez had more than 30 people reporting to him and was responsible for 105 machines operating for 12 hours a day.

During those working years, Estevez said, a growing family and home ownership led to 80 and 90-hour work weeks.

“Any time I had extra time, it became overtime. I did the best I could until the day they closed the door,” he said.

Once the doors closed, Estevez was looking to open new ones. He enrolled as a full-time student in NECC’s business management program. His first class was “Reading, Writing & Reasoning.”

“On the first day of class we were asked to write an essay. An essay? I thought. I haven’t been in school in 28 years. What’s an essay,” he joked.

He tackled the essay and plenty of other assignments over the next two years. He found his nearly 28 years with a large company had provided its own education. Wisdom, he said, he was allowed to share with classmates. It turns out being a supervisor has its merits in the classroom. Through hard work and collaboration, Estevez will graduate with a 3.67 GPA and membership in the Alpha Beta Gamma business honors society.

And that’s not all.

In the spring of his second year, Estevez enrolled in the internship course. In addition to earning college credit, he worked in Haverhill Mayor James Fiorentini’s office as an unpaid administrative assistant helping with office tasks and constituents’ concerns. He was also able to employ his bilingual skills.

“You acquire a lot of knowledge through an internship,” he said. “More students should take advantage of it.”

Estevez hopes to continue his volunteering in the Mayor’s office over the summer while he mulls over where to attend college to earn his bachelor’s degree. He admits to being spoiled by Northern Essex.

“Northern Essex is a great family. The staff is tremendous,” he said. “From tutors to faculty to staff, everyone is helpful. I’m sad to be leaving. I always tell my children, ‘Education is power. You don’t know what doors it will open’.”

This is Luis Estevez’s story. What’s your story? #MyCommuityCollege