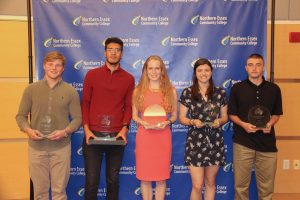 Northern Essex Community College Athletics hosted its 2nd annual Awards Banquet on Monday evening to honor the achievements of its student-athletes. Nearly 100 students, staff, family and college administrators were all on-hand to celebrate the many accomplishments on and off the field. The evening was highlighted by the presentation of four major awards: Faculty Staff Recognition, Unsung Hero, Scholar Athlete, and Athlete of the Year.

The Faculty/Staff Recognition Award is presented to an individual from within the campus community who works outside of the athletic program, but plays a significant role in supporting student-athletes pursuing their academic and athletic endeavors.

The Unsung Hero Award is presented to one student who has made significant contributions to his/her team and/or within the campus community who contributions are noticed more than just statistically.

The recipient of the Unsung Hero Award was Andy Barrientos of Lawrence who was a member of both the men’s cross country and track teams. Andy was significantly impacted by the devastating explosions that rocked the Merrimack Valley in September was without access to daily necessities such as gas and electricity for the entire cross country season. Barrientos was a solid number five runner on the cross country team that went onto finish 22nd at the national championship meet held in November. As the Unsung Hero award winner, Barrientos was also presented with a new lap top computer donated by Dell Inc.

The Scholar Athlete Award is presented to individuals who have significant contributions to their respective teams while also maintaining an overall grade point average of 3.0 or higher.

The female recipient of the award, Katelyn Richardson of Wilmington is a member of the women’s cross country and track and field teams and currently boasts a GPA of 3.80. On the track Richardson is the school record holder in the high jump and also became the first female in the history of the program to compete in the steeplechase event. She has hit the NJCAA national qualifying mark in both of the aforementioned events and will compete May 9-11 in Utica, NY at the national championship meet.

The male recipient of the award, Kyle Scott of Dracut is a second-year member of the basketball program who carries a GPA of 3.67 and had a perfect 4.00 in the fall semester. After missing the second half of his freshman campaign with an injury, Scott returned this season to appear 25 of the teams 28 games with 11 starts. He finished the season making 90% of his free throws.

The Athlete of the Year Award is presented to one male and one female student-athlete who has performed at a high level throughout the course of their season(s) while maintaining satisfactory academic progress at the college.

The female recipient of the award, Rachel Amiss of Salem, NH, was a co-captain of the volleyball team this past season and helped lead the team to 13-5 overall record, going undefeated in Region 21 play and ultimately falling one game win shy of qualifying for the NJCAA Nationals. Her .356 hitting percentage for the season was tops in the region and eight nationally for the season. She also finished second in the region in four additional statistical categories.

The male recipient of the award, Spencer Brown of Beverly is a rookie on this year’s baseball team and whose name appears near the top of every offensive statistical category in the country through games played this past week. He currently leads the nation with 17 home runs and slugging percentage at 1.132. He is also currently second in batting average at .512.