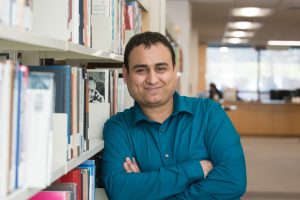 When Michael Mankarios immigrated to the United States from Egypt six years ago, he had $200 to his name, no connections, and an uncertain academic future.

Now, just a short time later, he has more than he thought possible: a full-time job, an associate degree, and – to top it all off – a full scholarship to UMass Boston.

Mankarios is the latest Northern Essex Community College student to receive the Foster Furcolo Scholarship, a highly competitive award granted each year to eligible students of Massachusetts public two-year colleges. He was selected at the recommendation of President Lane Glenn and approved by a committee of UMass Boston representatives.

Only one graduating student from each of the commonwealth’s community colleges is chosen annually for the prestigious scholarship.

“This award means everything to me,” Mankarios says, on learning of his win. “It reminds me that all that work and hardship wasn’t for nothing. This will make me so much more eager to do even more work and excel in life.”

Mankarios, who is a first-generation college student, and a recent U.S. citizen, had long been determined to earn a degree in the United States. After being approved for a visa in 2012 and subsequently moving to Haverhill, he wasted no time in searching for a funding source that would cover his eventual academic career. He found it through a series of jobs.

“When I settled here, I was working 60 to 75 hours a week to help my family back in Egypt and also create a sustainable source of income for school,” he says. “It took about three years to get established.”

By 2016, all that hard work had paid off. Mankarios soon enrolled in NECC’s criminal justice program and integrated himself into myriad campus organizations, including the Pathways to Academic and Career Excellence (PACE) program, the Criminal Justice Club, Phi Theta Kappa, and the National Society of Leadership and Success. More recently, he took on an internship position at the Lawrence District Court, which helped refine his interest in and understanding of the criminal justice field.

“My goal is to eventually work in forensics,” he explains. “I want to use my knowledge in this field to become a good role model, serve the community, and have a positive influence on my family, friends, and peers.”

With a degree and full scholarship in hand, Mankarios is certainly well on his way to doing just that. He will begin working toward a bachelor’s degree in criminology at UMass Boston this fall.

Mankarios believes that his academic success could not have been possible were it not for the support that his professors, advisors, and peers offered throughout his time on campus.

“In the end, NECC was the right choice,” he says. “The staff are just amazing – they helped me along the way. They gave me hope and encouragement when I was very down. If it weren’t for them, and for PACE especially, I know I would be lost.”