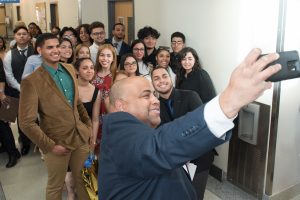 The students have been attending courses offered on NECC’s Lawrence Campus for the past two years.  They were celebrated for their achievements at a recognition ceremony on Tuesday evening, May 21 at Northern Essex’s El-Hefni Allied Health & Technology Center.

NECC President Lane Glenn credited the Smith Family Foundation for providing the funding for the Early College Program.  He also announced that—as a result of a donation from the Stevens Foundation of North Andover—twenty-six of these students have been selected as Lawrence Promise students and will continue on to Northern Essex for an associate degree with all expenses paid, including textbooks and a free laptop.

“Our goal is to give every Lawrence High School graduate access to the benefits of a college education,” said Glenn.   “We’re so happy that the Smith Family Foundation and Stevens Foundation are helping us make this a reality.” 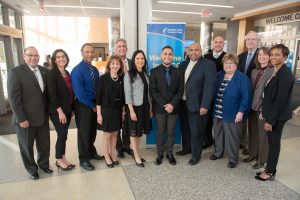 VIP’s take a photo with LHS senior Alexis Martinez (center) who was the student speaker at the NECC Early College Recognition Ceremony.

One student Johan Mejia, will join the military, and, after basic training, he will enroll in online courses at Northern Essex as part of the Lawrence Promise Program.

Alexis Martinez, the first Lawrence High School student to be accepted to West Point in almost four decades, was the student speaker at the recognition ceremony.  He expressed appreciation for the Early College Program in his remarks to the audience of family, friends, and community leaders.  “This opportunity is unique and none of us took it for granted,” he said.  “We learned how to make hard deadlines, time management, and procrastination management.”

He also told fellow graduates that this would be the start of great things.  “We need to be the rose that grew from the concrete.  Some people are handed everything on a silver platter but that’s not us.  It’s important we stand together, and never give up on one another.”

Mayor Dan Rivera had a similar message for the graduates.  “Much has been given to you, by your parents, by NECC, by your faculty and staff, and we want you to the best you can be.  If you’re going to bet on a kid, bet on a kid from Lawrence.  We are always underappreciated and we always excel.”

Here’s a list of all students who were recognized. 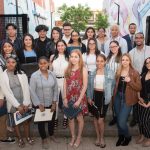 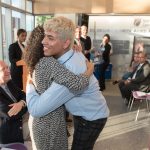 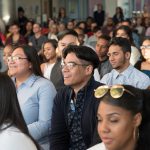 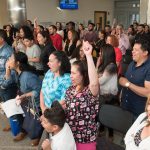 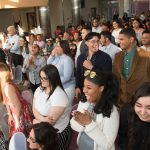 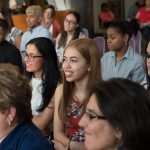 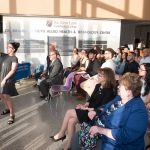 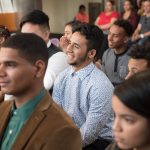 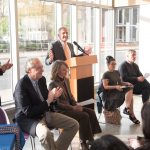