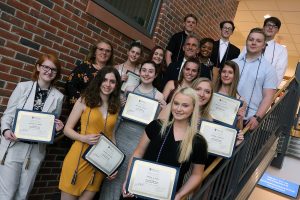 Ethan Vient of Amesbury graduated from the NECC/Amesbury High School Early College Program two years ago, and he credits the program with helping him to save thousands of dollars on the cost of his college degree.  He’s now a student at the University of New Hampshire, majoring in economics, and he plans to graduate a year early, as a result of the 36 college credits he earned while in high school.

“UNH accepted all of my Northern Essex credits,” said Vient.  “I hope to graduate a year early, which will save me at least $20,000.”

Ethan talked his younger brother Levi into participating in the Early College Program, and, on Thursday evening, May 23, he was there to cheer Levi on as he and his 23 classmates, all Amesbury High School seniors, were recognized for completing the program. 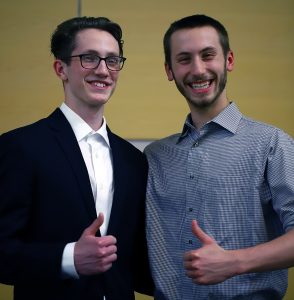 Five of the Early College graduates, including Levi, will continue at Northern Essex, while the others will transfer their Early College credits to colleges including UMass Amherst, UMass Boston, UMass Lowell, University of Delaware, Lesley University, Salem State, Endicott, Suffolk, and Salve Regina.

At the ceremony, Amesbury High School Principal Elizabeth McAndrews spoke about the history of the Early College partnership which was started in 2008.  When the program began, students took most of their courses at the high school, but students are now increasing the number of credits they can earn by coming to the Northern Essex campus for additional courses.  “This program enables them to graduate from college one or two semesters early,” she said.

Charlotte Miller, the student speaker, will transfer to UMass Amherst in the fall.  She said that when she started the program as a sophomore, she was a “shy, quiet, no confidence kid.”  “I walked out a completely changed person,” she said. “I learned that I have a voice worth hearing.”

The 24 students took 125 college courses, an average of approximately five courses each.

Also speaking at the ceremony were NECC President Lane Glenn, a resident of Amesbury whose daughter Thomasina completed the Early Program last year, and Noemi Custodia-Lora, NECC’s vice president of the Lawrence Campus and community relations, who oversees the college’s K-12 partnerships.