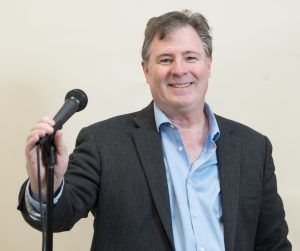 Dave Rattigan, a member of the NECC faculty, also happens to be a writer and a comedian.

As a professional comedian, Dave Rattigan can’t help but interject a bit of fun into his interpersonal communications and public speaking classes.

For the last 15 years, this writer turned stand-up comedian has been helping Northern Essex Community College students find their voice while standing in the most terrifying of places – in front of an audience.

“I enjoy teaching interpersonal communication, but public speaking can become a transcendent experience for some people,” he says. “It’s nice to see that happen. Very often I see it happen right there in the class, over the course of a semester.”

With a public presentation course now a core requirement for graduation, Rattigan works to make the experience enjoyable as well as educational.

“I try and keep the class loose, but still engage with the subject. Public speaking can be intimidating, so the goal is to keep it light and get people to drop their defenses,” he says. “I want the students to work, but have fun and be engaged.”

When Rattigan’s students gain the skills and confidence to become better communicators, they grow personally and professionally. During his years as an adjunct professor, students have confided in Rattigan that lessons learned in his class have led to new careers, successful company speeches, membership in student-professional organizations, and the delivery of thoughtful sermons.

Like a proud parent, he has witnessed “dozens” of public speaking students evolve from “nervous wreck to competent speaker”.

Like so many of his students, Rattigan’s path has been a circuitous one.

After enrolling in more than one private and public university and college, he, earned a bachelor’s degree in writing, literature, and publishing from Emerson College and a master’s in management from Cambridge College. He has more in common with his students than they know.

“As someone who dropped out of college more than once, I identify with many of my students,” he said.

While admittedly his path has been somewhat nontraditional, Rattigan believes he is exactly where he is meant to be. He credits the unlikely trilogy of Arthur Conan Doyle, Edgar Allan Poe, and Leigh Montville with his love of the written word. It was the television comedians of the 60’s and 70’s who drew him to funny business.

His professional life has been an eclectic mashup of writing, comedy, and business. He has written for The Boston Globe, People Magazine, and other publications, performs stand-up comedy two to four nights a week, and produces comedy shows under the moniker Scamps Comedy Productions. He also teaches professional communications at UMass Lowell.

From his combined experiences he has learned one lesson that he imparts to his students.

“Communication skills are important for success, so when students leave my class with strong interpersonal communication knowledge, good fundamentals for speaking in a real-life environment, and sharper critical-thinking skills, I know it will make their lives better….they are here to improve their lives. I like that I can play a small role in their journey.”

Rattigan’s own happily complicated life is the result of taking chances and he encourages his students to follow suit.

“I would tell prospective students to ‘Do it. Do it now because life is finite and you want to live it to its fullest,” he counsels.

When Rattigan isn’t teaching, or on a writing assignment, or performing a gig, he plays dad to a 13-year-old girl.

“Because of my odd schedule and life priorities, I used to pick her up from school and spend every afternoon with her. She’s a teenager in middle school now, so I’ve become an annoying source of money and rides. Middle school is frightening for parents as well as kids, but she’s smart and funny and it makes me happy to see her developing into a good human being.”

He can be reached at drattigan@necc.mass.edu