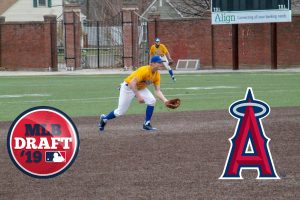 Northern Essex Community College freshman shortstop/right-handed pitcher Spencer Brown of Beverly was selected on Wednesday afternoon by the Los Angeles Angels of Anaheim in the 39th round of the Major League Baseball First-Year Player Draft. Brown could likely report to the Class A Burlington (Iowa) Bees upon signing.

Brown concluded his rookie campaign with the Knights as the national leader in home runs with 17 and slugging percentage at 1.000. He also finished fourth nationally in batting average at .486 and fifth in total bases with 146.

Brown joins a number of fellow former members of the Northern Essex baseball program who have had their names called in the MLB Draft. The most notable draftee out of NECC is likely 1987 National League Cy Young award winner Steve Bedrosian who was drafted in the 3rd round of the 1978 MLB Draft by the Atlanta Braves.