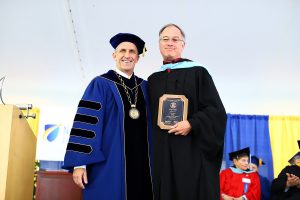 Gagliardi was a clinical social worker and therapist for 25 years prior to joining the Human Services faculty at Northern Essex in 2001.  She retired last year as coordinator of the program.

President Lane Glenn credited Gagliardi with bringing both enthusiasm and real world experience to every class she taught. 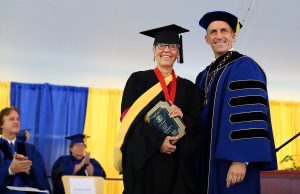 “She loved teaching and her students loved her,” he said. “Jane was also an extremely effective coordinator, assuring the program’s curriculum met the needs of the community.”

Kennedy, along with her partner, Susan Sanders, was the face of Northern Essex’s Theater Program for more than 30 years. In addition to teaching, she directed two, full-length shows each year, productions that ranged from Shakespeare to Broadway musicals. She also acted alongside her students, most famously in the college’s annual production of “A Christmas Carol” which she starred in and directed for 15 years.

“Her legacy is the many Northern Essex graduates who are working professionally as actors, directors, stagehands, and costume designers,” said Glenn.

She was named Professor Emerita of Theater.

LeBlanc joined NECC’s English faculty in 1988. For more than a decade, he was faculty advisor to the “Observer,” NECC’s award-winning, student newspaper and coordinator of the college’s Journalism Program. 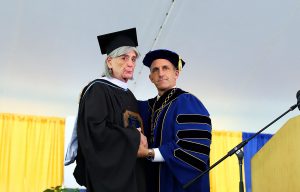 “Joe was demanding but well-loved and greatly respected,” said Glenn. “Under his leadership, the Observer received national and regional recognition.”

He was named Professor Emeritus of English.

Blanchard Mitchell was the first in her family to earn a college degree, and she devoted her career to helping other first generation students succeed in college. 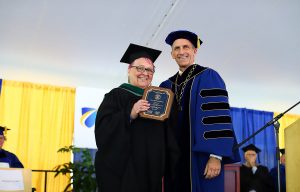 She joined Northern Essex as a career and academic counselor in 1993, and, in 1997, she was named director of the PACE Program, a federally funded program that provides support services for disadvantaged students.

“Under her leadership, the college’s PACE Program became a national model,” said Glenn. “It was ranked by the U.S. Department of Education as one of the 10 best and most effective student support services programs in the nation.”

She was named Director Emerita of Pathways to Academic and Career Excellence.