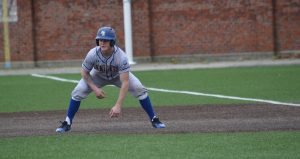 Spencer Brown has been named first team All American by the NJCAA.

Spencer Brown of Beverly and Leo Romero of Lawrence, both members of the Northern Essex Community College baseball team, have been named to the NJCAA Baseball All-American teams.

The NJCAA All-American teams each consist of 12 individuals with eight position players, three pitchers and a designated hitter being selected to each of the three teams. Brown was selected to the first team with Romero landing on the third team. Romero, who was a first team selection last season becomes just the second two-time All-American in NECC program history matching the feat of Chris Anderson in 2005 and 2006.

Brown, a first team All-Region selection and 39th round selection of the Los Angeles Angels in the MLB First Year Player Draft, concluded his rookie campaign with the Knights as the national leader in home runs with 17 and slugging percentage at 1.000. He also finished fourth nationally in batting average at .486 and fifth in total bases with 146. 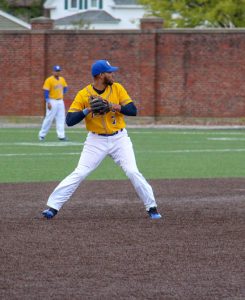 Romero, also a first team All-Region selection, led the region in RBI’s with 58 and was fourth in batting average checking in at .452. Both of those numbers ranked 14th and 13th respectively at the national level. He also hit six home runs which ranked third in the region.

Northern Essex concluded its season with a 25-16 record falling in the Region 21 championship round. The loss ended the Knights run at seven consecutive regional championships (2012-2018), however they did capture their eighth consecutive Massachusetts Community College Athletic Conference championship title.