Lawrence Man has the Right Chemistry for Lab Science 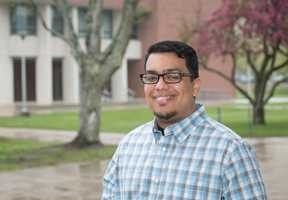 Luis Robles was just a little boy when he told his parents he wanted to be a scientist. Last May, he moved another step closer to that vision when he accepted his associate degree in laboratory science during Northern Essex’s 57th Commencement Ceremony.

Admittedly the road to his degree has been circuitous. The 26-year-old Lawrence resident was raised on the U.S. Virgin Island of St. Croix until he was 14 when he moved to Pennsylvania with his mom. After just one year, he returned to the islands, settling in St. Thomas for a year. By the time he reached the 12th grade, he moved to New Jersey with his sister. Although he enrolled in the local community college following high school graduation, a summer trip to visit his dad who was in failing health and subsequently passed away, turned into an indefinite stay.

Robles was working at a call center when he met his wife. They made the collective decision to move to Lawrence to be near her family and nearer to his dream. In 2015, he was working for a temp agency in a multitude of laborer jobs.

“I decided I wanted to better myself through higher education,” he said. “I knew I could find better opportunities.”

He approached Northern Essex with the intention of enrolling as a chemistry major.

“Science was always my favorite subject especially chemistry,” he said. “I was always mixing solutions or playing with electricity. So when the advisors told me about the laboratory science degree, I decided to enroll in the program and I’m happy I did. It excites me when I understand a concept about how something works.”

Wit the help of the Pathways to Academic and Career Excellence (PACE) Program, a federally-funded student support services program that helps students succeed, Robles graduated with a 3.95 GPA, the Excellence Award for top student in the laboratory science program, and an invitation to participate in the Station1 10-week summer fellowship program based in Lawrence. Through this nonprofit organization, he will receive a stipend while gaining hands-on experience in a leading science and technology company while being mentored by individuals from a diversity of fields. Luis was selected from many hundreds of students nationwide.

During his two plus years at Northern Essex, Robles has balanced a full academic schedule with a full-time job at a call center and more recently an automotive center with raising a family that includes a two-year-old and two stepsons.

With his new degree, Robles expects to begin work after his fellowship. Eventually he hopes to return to higher education for a bachelor’s and possibly a master’s degree.

“I want to keep growing my knowledge base and my experience,” he said, “so that one day I can use my career to make a positive contribution to society.”

He hopes his future educational experiences are as positive as his experience at NECC.

“Everyone her has been so supportive,” he said. “Everyone has such a positive attitude and very respectful. “I am grateful to my professors for believing in me and motivating me. They inspire me to go above and beyond.”

NECC Grad Continues His Education with a Little Help from Oprah

Transitioning to Online: Reflections from a Faculty Member

Sarah Courchesne, professor of natural sciences, taught online for the first time in the spring, due to the pandemic. Courchesne values connecting with her…
More articles »

Northern Essex Community College is expanding its health care programs, thanks to a $400,000 grant which the college recently…
More articles »

The Northern Essex Community College Top Notch Players will stream a production of “Love Letters” by A.R. Gurney, Dec. 10 through 12. In this tragic-comedy, childhood friends Andrew Makepeace Ladd III and Melissa Gardner read communication they have exchanged over…
More articles »