Newburyport Resident Has New Career in Boston; Thanks to Recently Earned Degree 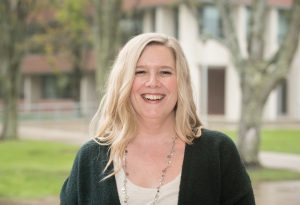 For Holly Flinn, who graduated from Northern Essex Community College last month with her associate degree in Radiologic Technology, commencement represented an important step in a decades-held dream of working in healthcare.

The 42-year old Newburyport resident began thinking about a career in the field several decades ago, but faced a problem familiar to many – life got in the way. Once a prospective nursing school student, she put her education on hold to raise a family and support them with a steady income. It was only after experiencing a series of challenging circumstances, including the passing away of her father, that she found herself ready for a positive change of pace.

“I had let my own self-doubt scare me away from going back to school for a very long time,” she says. “I had thought about it often, but it wasn’t until after my dad passed away that I realized how fragile and short life is. I didn’t want to regret not trying.”

Flinn started out by taking the occasional business class at NECC, and, by the summer of 2017, officially enrolled full-time in the Radiologic Technology program.

The new atmosphere, while welcome, did take some time to adjust to. As a non-traditional student, Flinn was often the oldest student in a given class.

Many of her peers, she observed, were the same age as her son, who graduated from college in 2016.

“It’s not always easy being the oldest in the room,” she says, “but my classmates have been awesome and some of them now even call me ‘Mom.’”

Finding her niche, Flinn eventually worked up the courage to participate in campus life activities, joining both the Rad Tech Club and Buzz Bowl Team and representing the latter during the Massachusetts Society of Radiologic Technologists (MSRT) annual conference this past April. She also joined the American Society of Radiologic Technologists (ASRT) Student Leadership Development Program, as well the MSRT scholarship committee for the 2019/2020 academic year, through which assisted in the process of awarding aid to deserving students in the field.

Her ongoing leadership efforts have been widely recognized on campus and beyond. Flinn has received multiple accolades, including the NECC Janet Bourque Memorial Scholarship, the MSRT Florence Wakefield Scholarship, and the MSRT Oliver E. Merrill Scholarship. This spring, she was also nominated for the NECC Outstanding Student Award, given to one exceptional graduating student each year, and was awarded the Joint Review Committee on Education in Radiologic Technology (JRCERT) Clinical Excellence Award.

Despite the impressive list of successes, however, Flinn emphasizes that her time at NECC was no breeze.

“It has been a difficult and extremely stressful two years,” she says, “but I am very lucky to have such a supportive family and group of friends without whom none of this would be possible.”

Flinn, now looking forward to the next step in her career, recently passed the American Registry of Radiologic Technologists (ARRT) exam and accepted a full-time position as a licensed radiologic technologist at Beth Israel Hospital, where she will work in the cardiac catheterization lab, as a well as a per diem position at Holy Family of Methuen.  Eventually, she says, she would like to move on to a four-year institution to pursue a bachelor’s degree.