Haverhill Man Gets Diploma 57 Years After He Started 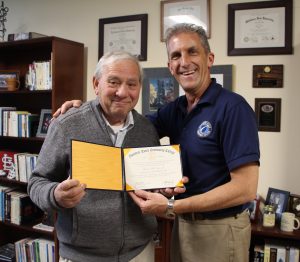 Ted Gaiero of Haverhill receives his associate degree from NECC President Lane Glenn, almost six decades after he started at the college.

It took Ted Gaiero of Haverhill 57 years to get his diploma from Northern Essex Community College, and, now that he has it, he couldn’t be happier.

Gaiero enrolled at Northern Essex in 1962 as a member of the college’s second class.  When it came time to graduate in the spring of 1964, he didn’t have the credits to get his Associate Degree in Liberal Arts.  He transferred to Suffolk University that fall, but always regretted not graduating from Northern Essex.

Gaiero earned his bachelor’s in history from Suffolk in 1972, after being drafted and serving in Vietnam, and he’s just a few credits shy of a master’s in education from Salem State.

Now fully retired from a successful career in sales and a second career working as a paraprofessional in the Haverhill School System, Gaiero kept thinking about the associate degree that he never got.  “It’s a part of my life that I worked for, and I want to see it through,” he says.

When Northern Essex President Lane Glenn learned about Gaiero’s desire for a Northern Essex degree, he reached out to Sue Shain, the college’s registrar, who was able to transfer Gaiero’s credits from Suffolk to Northern Essex, a process which is called reverse transfer. 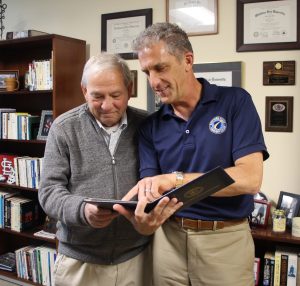 Through reverse transfer, students who made progress toward an associate degree prior to transferring may apply credit earned at a four-year institution back to their community college to complete the associate degree requirements.

In June, Gaiero visited President Glenn’s office and was personally presented with his associate degree.  His name will be included in Northern Essex’s 2020 commencement program as a member of the class of 2020.

Gaiero was beaming.  “It feels phenomenal.  I’m just very proud,” he says.  “Now, I just need to find a place to put it.”