Eight student-athletes at Northern Essex Community College have been named to the All-Academic teams for the 2018-19 academic year by the NJCAA. 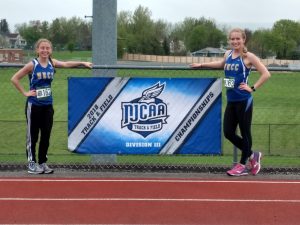 Olivia Mullins (left) and Katelyn Richardson (right represented NECC in the NJCAA track and field Nationals last year. They are two of the NECC student-athletes to be named All-American this year..

The eight selections match the record for most honorees in a single year at Northern Essex which was established a year ago. With this year’s selections, the college now has a total of 33 all-time, All-Academic selections.

To be eligible for the award a student-athlete must have  a */grade point average for the year of 3.60 or higher. Based on the overall grade-point average, student-athletes are named either First, Second or Third Team All-Academic. Three of the eight honorees were earned 2nd team Academic All-America honors, while the five others were selected to the 3rd team.

Representing the Knights on the second team are volleyball’s Christine Ortega of Haverhill, Kyle Scott of Dracut, a member of the men’s basketball team and Mike Stellato of Lynnfield from the baseball team. Third team honors went to Olivia Mullins of Plaistow, NH, and Katelyn Richardson of Wilmington, both of the women’s track and cross country teams. Rachel Amiss of Salem, NH, and Amanda Forgetta of  Malabar, FL, of the volleyball team were recognized on the third team along with baseball’s Andrew Caulfield of Malden. Richardson, Forgetta, Amiss and Caulfield are all second time honorees.

The three selections from volleyball match the most selections from any one team in a given year. Ortega boasted a 3.96 GPA for the year appearing in 10 matches at outside hitter. Amiss recorded a 3.77 GPA while appearing in all 18 matches. She finished the year tops in the region with a .356 hitting percentage that also ranked 8th nationally. She was named NECC’s Female Athlete of the Year at the annual awards banquet in April. Forgetta posted a 3.67 GPA, also appearing in all 18 matches and led the region in both kills (136) and kills per set (2.43).

Stellato led the two baseball selections with a 3.96 GPA, he appeared in 23 games this season batting .306 with 15 hits and 21 runs scored. Caulfield sported a 3.79 GPA appearing in 18 games with a .276 average and three home runs.

Championship and was also a qualifier for two cross country national championships and competed in the 1500 at last year’s NJCAA Championship.

Scott recorded a 3.80 GPA for the year and was named NECC’s Male Scholar Athlete of the Year at the awards banquet in April. He returned to the court this season after missing the second half of his freshman campaign to injury. He appeared in 25 games this past year with 11 starts and finished the season shooting 90% from the free-throw line.