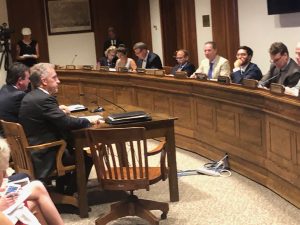 There are currently no education requirements for police officers in the Commonwealth, except for those covered by Civil Service, who are required to have a high school diploma or equivalency certificate or three years of experience in the armed forces.

House Bill 3810: An Act Relative to Police Education and Training, presented by Representative Paul A. Tucker and Senator Michael O. Moore, would require that candidates for full-time police positions have an associate degree in criminal justice or a related field approved by the hiring police department or a minimum of 60 completed college credits for someone who is actively working toward a bachelor’s degree.  Testimony was in front of the Joint Committee on Public Safety and Homeland Security.

“The work performed by police officers in Massachusetts is becoming more complex, with greater requirements for understanding technology, legal issues, personal communications, psychology, community relations, and a number of other subjects,” said Glenn.  “Several national studies have demonstrated the value of post-secondary education for policing by illustrating that college educated police officers have better communication skills, a better comprehension of civil rights issues from multiple perspectives, receive fewer complaints and disciplinary actions, and are less likely to use deadly force, among other benefits.”

Glenn has been a leading advocate for changes to police education and training in Massachusetts.  He chaired the Department of Higher Education’s (DHEs) Police Education and Training Committee which was tasked with researching minimum education qualifications for police officers, statewide agreements on credits for prior learning experience obtained through Police Academy Training, and potential modifications and adjustments to the Police Career Incentive Pay Program, also known as the Quinn Bill.

Since the committee’s report was released in June of 2017, the DHE has adopted new policies that allow criminal justice programs on college campuses to provide credit for previous experience, including military experience and police academy training.  The DHE has also updated and revised its Police Career Incentive Pay Program accreditation process, and colleges have begun to reaccredit their criminal justice programs. House Bill 3810 addresses the last recommendation made by the committee.  As the bill moves through the legislative process this year, Glenn will testify on behalf of the bill again before the legislature’s Black and Latino Caucus on July 31.

Northern Essex Community College offers an Associate Degree in Criminal Justice and a Certificate in Law Enforcement.  The college’s Haverhill Campus is also home to the NECC Methuen Police Academy, which the college manages with guidance from an advisory board that includes police chiefs from Amesbury, Haverhill, Methuen, Lawrence, and North Andover.

In his testimony, Glenn urged legislators to support House Bill 3810.  “With the policy changes already made by the state’s Department of Higher Education and the willingness of the state’s colleges and universities to work closely with the Municipal Police Training Committee and local departments of police on collaborative programs, the Commonwealth has an opportunity here to create a high quality system of police education and training that will ensure a better educated police force, and improved safety and civil rights for citizens, while at the same time saving the cities and towns of Massachusetts millions of dollars each year.”