Personal Essay is Runner-up for Award 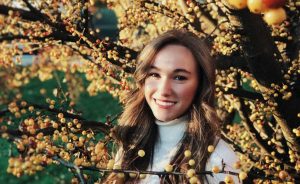 Lawrence resident Courtney Morin was a runner-up for a literary prize.

The nonfiction, short memoir, which was written for a Creative Nonfiction Class taught by Trish Portanova, explores the Lawrence resident’s journey navigating mental illness and how the illness affected her relationships.

“She wanted to us to write a story based on our own experience–it could be just one event, or something more. Ultimately, it was quite loose what we could write about. My piece was short snippets from the midpoint of my mental health conditions to finally receiving help over a span of about five years,” said Morin.

Morin wrote, “”I want to tell her though, that happiness has become a foreign language I cannot wrap my tongue around—translation too arduous of a task. Fear has taken residence here, in my throat, in my saliva. I swallow it every day.”

Kurt Brown was a poet and editor who founded the Aspen Writer’s conference. He was a founding director of the AWP. He died in June of 2013. Each year, the AWP offers three annual scholarships of $500 each to emerging writers who wish to attend a writers’ conference, center, retreat, festival, or residency. Winners and six finalists also receive a one-year individual membership in AWP. The goal of the contest is to spread the word about the incredible work being done at local writing centers, conferences, festivals, retreats, and residencies.

Sandra Gail Lambert, an AWP judge wrote, “The joy of reading this entry was the way the author wrote exuberant and lyrical sentences to describe how they could “never get the words right.” This type of creative dissonance is hard to achieve, but through the use of unique physical description and surprising metaphors the author sweeps us along, but never loses us, in a journey through “chaos.” This is exciting and impressive writing.”

Morin has been involved in many aspects of NECC’s campus life. In addition to serving as a student advocate, she was the student trustee to the NECC Board of Trustees last year. Last year she was the recipient of both Daniel Wilson Holroyd Memorial Scholarship and the Covanta Energy Scholarship. She was a semi-finalist for the national Jack Kent Cooke Under-Graduate Transfer Scholarship. She has served as president of the NECC Student Government Association and Students for a Democratic Society Club, she has been a member of the Student Leadership Institute, Amnesty International Club, and a staffer and contributor to “Parnassus” the college’s arts and literary magazine.

The Honors Program student hopes to embark on a career in human rights law.