NECC Alumna to Visit “Home” With her Book 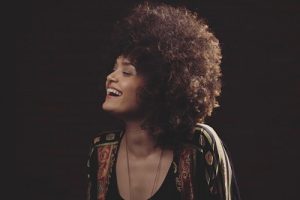 Northern Essex Community College will host published poet and NECC alumna Diannely Antigua on October 9, 2019 in Lecture Hall A in Spurk at 2 p.m. to give an exclusive reading and discussion of her poetry book “Ugly Music.”

Antigua, a Dominican American woman raised in Haverhill in “a very sheltered environment” she says, enrolled at NECC when she was only 16 years old. From her humble beginnings at a non-accredited church school in Haverhill, her growth at NECC led her to be named the commencement speaker in 2009 when she graduated with an associate degree in liberal arts. Her experience as commencement speaker, along with the public speaking class she took here at NECC prepared her for many of the public speaking events and readings she does now as a published poet.

Antigua credits Northern Essex with “raising her” she says: “I met the professors along the way that were really helpful, also the classes that I decided to take just really helped lay the foundation for classes that I would take later on at UMass Lowell and NYU.” One professor she had here at NECC served the role of being her writing mentor. Robert Jackson, who is still in her life 13 years later has been so helpful to Antigua with everything from reading her writing samples to helping her apply to grad schools.

She was involved with Parnassus, NECC’s own literary magazine and she currently continues to submit her poems to literary magazines regularly. She even landed the role of associate poetry editor at a magazine called BOAAT, a position she had to step down from to give more attention to her book “Ugly Music.”

Her book she’ll be reading from at the NECC event “Ugly Music” was published in May earlier this year and deals with subjects like immigration, mental illness and sexual assault. Antigua, a survivor of sexual assault at the age of only 11 years old says she doesn’t want to shy away from talking about those subjects and uses her platform as a way to heal from her trauma, and to help others who may be dealing with similar situations. “I think there’s very few people that haven’t been affected by one or both of those topics,” she says. She also attends weekly therapy sessions.

“One of the lessons I learned as a girl was to keep those things quiet. We’re seeing that now as people are speaking up through the ‘me too movement’. They’re just now being able to voice their trauma. This was kind of my own way of having my own ‘me too moment’, which was my book,” she says.

Antigua also masters the art of melding her experience with these sensitive subjects and the mundane. In her poem “Re-Education” she gives a special shout-out to a Haverhill burrito hot-spot Tacos Lupita, but also talks about Plan B. “I have a lot of epiphanies while doing very mundane things in life, it’s always been that way. I’ve always very much appreciated the mundane,” she says.

The growth of Antigua’s poetry career sparked when she was published for the first time in UMass Lowell’s literary magazine. Later, she was accepted into the master’s program at NYU for creative writing. “To this day I’m still very much surprised that I got into that program” she says about NYU. She was still working on her thesis when her friend encouraged her to submit her book for the Pamet River Prize which came with a publication. She ended up winning that prize and was published by YesYes Books in May of 2019.

Antigua offers advice to anyone who wishes to pursue their passion who might need encouragement: just show up and continue to show up even when you feel like you don’t have anything to give to your craft, she says. “I think sometimes we can get recognition from outside of ourselves and that feels great, but I think it’s important to recognize for yourself and be proud of the work that you’ve done. And then being able to recognize the work that you’ve done, allows you to come back to that work again and say ‘well I’ve done this so far and I can keep going,’” she says.

As far as coming back to the Haverhill campus at NECC, Antigua remembers a time when the Newbury Café in Spurk was called “Jitters” and she would spend hours writing there and meeting with her writing mentor. She says, “The simple act of being back on campus, I think will be magical because it’s definitely a home for me in many ways. It’s kind of like coming home after being on a long journey and talking to your family about all the things you did while you were gone.”