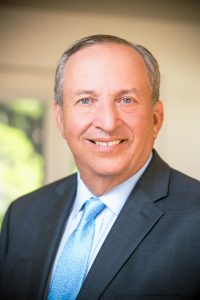 Lawrence H. Summers, former Harvard University president and secretary of the U.S. Department of the Treasury in the Clinton Administration, and Director of the National Economic Council in the Obama Administration, will speak to students, faculty and the Northern Essex Community College community on Wednesday, Oct. 2, at 11 a.m. in the Pentucket Bank Lecture Hall A, on the Haverhill campus, 100 Elliott St.

This event is free and open to the public. It is being organized and facilitated by NECC History Professor Rich Padova.

President emeritus of Harvard University, Summers’ tenure at the U.S. Treasury coincided with the longest period of sustained economic growth in U.S. history. Summers has played a key role in addressing every major financial crisis for the last two decades. During the 1990s, he was a leader in crafting the U.S. response to international financial crises arising in Mexico, Brazil, Russia, Japan, and Asian emerging markets. As one of President Obama’s chief economic advisors, Dr. Summers’ thinking helped shape the U.S. response to the 2008 financial crisis, to the failure of the automobile industry, and to the pressures on the European monetary system.

Summers will discuss the current economic issues of the day. His talk will be followed by an informal pizza luncheon with students.

Summers received a bachelor of science degree from the Massachusetts Institute of Technology in 1975 and was awarded a Ph.D. from Harvard in 1982.

He is currently the Charles W. Eliot University Professor at Harvard University, where he became a full professor at age 28. President Bill Clinton said that Summers “has the rare ability to see the world that is taking shape and the skill to help to bring it into being.” He has been recognized as one of the world’s most influential thinkers by Time, Foreign Policy, Prospect and The Economist magazines among many others.