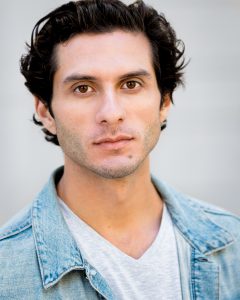 Eduardo Chavez, grandson of Cesar Chavez, will present his film “Hail Cesar” on Thursday, Oct. 3, on the Lawrence campus.

This showing, which is one of the events planned for Northern Essex’s Hispanic Heritage Month celebration, is free and open to the public. It is sponsored by the White Fund in partnership with Northern Essex Community College.

The younger Chavez, who was born in 1991, did not know his famous grandfather who died in 1993. The film captures his journey to connect with his grandfather’s legacy. He begins work as a farm-worker, picking grapes in the field, like his father and grandfather before him, and learns first-hand the kind of work that goes into putting fruits and vegetables on people’s plates. Through his personal journey, as he reconnects with his family’s legacy, we learn about Ceasar Chavez’s plight to create equality for farm-workers as well as the current conditions that they face in the fields and back at home.

While his paternal grandfather was Cesar Chavez, his maternal grandfather was Cuban revolutionary Max Lesnik. He attended Loyola Marymount University on a golf scholarship and played professional golf following college. He is currently a working actor in Los Angeles and recently premiered his first film, “Hailing Cesar”. His goal is to bring depth to the portrayal of Latino characters in film, television and other media. He is also the co- founder of Latindia Studios.

Additional information on the film can be found at here.

For additional information or to be notified of upcoming events in the White Fund Enlightenment Series, contact Garcia at agarcia@necc.mass.edu  or call 978-738-7423 or visit the website