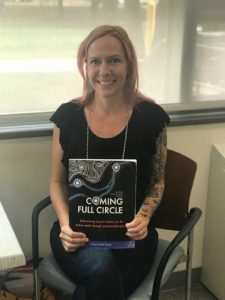 Anthropology Professor Kristi Arford with the text book she created.

For nearly a decade, NECC Anthropology Professor Kristi Arford dreamed of a textbook that would engage her students. Frustrated when she couldn’t find one, she decided to create one.

After compiling a list of “musts” for the perfect anthropology textbook, Arford spent her spring 2017 sabbatical, researching and writing the anthology “Coming Full Circle: Rediscovering Ancient Wisdom for the Modern World through Cultural Anthropology” which was published by Cognella Academic Publishing.

Arford, who uses the textbook in her Anthropology I courses, donates 100 percent of the proceeds to offsetting the cost of participation in NECC’s Study Abroad Program. To date nearly $2,000 has been donated.

“Every anthropology textbook I found was boring, dry, and traditional with an outdated approach to anthropology,” Arford said. “I was looking for a fresh approach. I wanted content that was relevant to the students’ actual lives.”

Each chapter opens with an introduction written by Arford who presents the topic. This is followed by a page of key terms used in the chapter and a number of articles written by scholars. She includes a “Why Should I Care?” section, which was the direct result of a student asking that very question.

“I realized it wasn’t always obvious to the students as to why they should care about studying other cultures,” she said. “This lays it out for them. It highlights why it is relevant to the world and to their life.”

Topics covered in the text include gender, spirituality, and belief systems with an overarching theme of sustainability.

“A culture’s values shape how they will act toward the environment,” she said.

“I have never seen an anthropology textbook cover happiness,” she said. “This looks at different cultures views of happiness or contentment.”

The title “Coming Full Circle…” was her attempt at noting that modern, traditional cultures are looking to older, indigenous cultures for their wisdom, The book jacket was designed by the publisher with input from Arford who hopes it would include the “dots” used in Australian “Aboriginal artwork.

The textbooks are available as bound or binder copies. They can be purchased through the NECC Bookstore or Amazon.