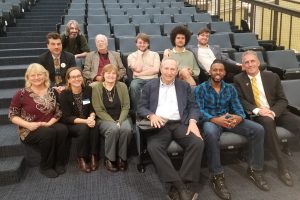 After his presentation, Larry Summers (front, center) had lunch and a casual discussion with students, faculty, staff, and members of the community.

Lawrence Summers, president emeritus of Harvard University, where he continues to teach economics, was on Northern Essex Community College’s Haverhill Campus to talk with students on Wednesday, October 2. During his two hours at the college, Summers covered a broad range of topics from closing equity gaps in higher education to the importance of getting involved politically.  His presentation was sponsored by the college’s Global Studies Department and arranged by Professor Richard Padova.

He opened his presentation with a message directed toward students, especially community college students.

“The battle for America’s future will be won or lost in our nation’s community colleges and by the people who study within them,” he said.

When asked by Northern Essex President Lane Glenn to elaborate, Summers said “Big things are the sum of small things.   If small things don’t work right, than big things don’t matter.”   To illustrate, Summers shared a story about his recent week-long hospitalization at Mass General Hospital for an undisclosed medical issue, crediting the excellent front-line care he received.   “In that hospital, a miracle was working.  People on the front lines of care— graduates of schools like this one—were careful and skillful and serious, and I felt better, much better, about the society of which I was part.” 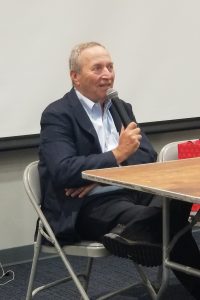 While Summers has spent most of his career at an Ivy League college, he recognizes the issues lower and middle income students face.   As Harvard president for five years, from 2001 to 2006, he is most proud of the policy he implemented guaranteeing accepted students with a family income of under $60,000 a free ride to Harvard.

“I wouldn’t want my money to go toward perpetuation of privilege,” he said.

Summers is optimistic about the future of our country, but he also sees challenges ahead.

Challenges, according to Summers, include declining opportunities for upward mobility for middle class families; shorter life expectancies, primarily due to the opioid crisis; and low levels of confidence and trust.

He told students that our country’s future depends on the choices they make on issues such as climate change and nuclear proliferation.

One student asked Summers’ advice on what he and other young people can do to improve themselves and the world in general.    Here’s what Summers shared:

·         Elect the best president by educating yourself on the issues

·         Volunteer four hours a week for the candidate you believe in

Summers also served as secretary of the treasury during the Clinton Administration and as the director of the White House National Economic Council and assistant to the president for economic policy for President Obama.

“Larry Summers has had a profound effect on politics, economics, and education in our country,” said Northern Essex President Lane Glenn.  “It’s an honor to welcome him to our campus.”