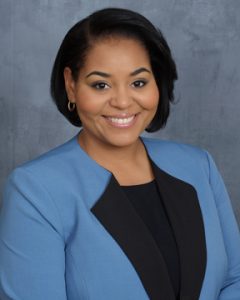 Dr. Jennifer Mezquita is as unapologetic about her academic title as she is about her dynamic personality. While the former was earned through hard work fueled by grit, the later came with her DNA.

As Northern Essex Community College’s new assistant vice president of student affairs, she hopes when Northern Essex students meet her they can identify with her and be inspired. For sure, Mezquita knows when she meets NECC students she sees herself in them and is inspired to help them succeed.

The new Haverhill resident knows well that community college students are a unique breed, often juggling family responsibilities with one or more jobs and a full class schedule. Mezquita knows because she was one.

Her story is their story.

Born in the Dominican Republic, she was raised by her grandparents until the age of 10 when she and her siblings joined their mom in Orlando, Florida, where she worked as a housekeeper for Disney. They arrived in the Sunshine state with their permanent resident cards and no knowledge of the English language – not even hello.

While she started her American education on the English as a Second Language track, by 10th grade she tested out of the program, resolute to attend college.

“Even though my mom only had a third-grade education,” recalled Mezquita, “She would tell me, ‘Your education is the one thing no one can ever take from you.’”

The first in her family to attend college, she earned a two-year scholarship to Valencia College, which was close to home. A work-study student, she worked a second job selling women’s suits and over scheduled herself with participation in campus organizations.

Mezquita earned her associate degree, but as a result of her over-zealousness at experiencing college,  grades suffered, she said. When she told a counselor she wanted to earn a bachelor’s at the University of Florida, it was suggested that she was being “silly”. She ignored the suggestion, applied, and was accepted.

While earning her bachelor’s degree, she worked in banking, got married and started a family. A casual comment by a bank customer who worked in higher education had her dreaming about working in the very environment she thrived in – education.

Her GPA had improved, but, she suspected, not enough to wow the admissions committee at the University of Central Florida where master’s and doctoral programs in Education Leadership caught her attention. She talked her way into the program with the promise of retaking her GREs and completing two summer courses.

She did both and eagerly started the program where one day a professor wrote a quote that resonated with Mezquita then and now. Dr. Rosa Cintron wrote “Your desire to learn counts more than any other qualification and seriousness more than brilliance.”

“To me, that sums up what community colleges are here to do,” Mezquita said. “Students can learn anything under the right circumstances.”

After climbing the academic ladder herself, she arrives at NECC with self-imposed priorities. Whether it is her staff or the students she is here to promote inclusion and equity.

Here only a month and already she has created “Walk Through Wednesdays,” with her staff where she checks in with them and encourages laughter and positivity in the work place.

What she won’t do, she said, is “lead from the office.” “If you want to get a pulse of a community you need to immerse yourself in it.”

She recognizes that what works at other community colleges won’t necessarily work here and is prepared to grow as she goes.

“A tree from Florida won’t grow here,” she said.