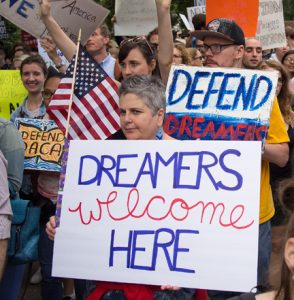 Across the nation DACA supporters have demonstrated.

On Friday, Oct. 4, 2019, Northern Essex Community College President Lane Glenn joined 164 colleges and universities from across the country in signing an amicus brief supporting the roughly 700,000 young immigrants who came to the United States as children and who hold Deferred Action for Childhood Arrivals (DACA) status.

“DACA recipients are American in every way; they built their lives here and contribute to our campuses, communities and our country’s economy every day,” said Glenn. “Northern Essex is proud to support DACA recipients, and we believe it is vital that we protect this vulnerable population when their futures are in question.”

This “friend of the court” brief was coordinated by the Presidents’ Alliance on Higher Education and Immigration. The brief can be read at here.

Since 2012, DACA has offered temporary protection from deportation and the ability to work legally to more than 700,000 young immigrants who came to the United States as children. The program has benefited these Dreamers, including our students, their families, their communities, and our economy tremendously.

On September 5, 2017, the Trump administration announced that they were terminating the DACA program. In the past two years, multiple courts have kept renewals ongoing for current DACA recipients, but Dreamers have still been forced to live court case to court case, uncertain about their futures and in fear of being separated from their families and the lives they have built over decades in the United States.

In defense of DACA’s continued existence, the brief argues that the rescission of DACA will severely harm the life prospects of these students and alumni, adversely affect our nation’s higher education institutions, undermine the many years of investments that colleges and universities made to support DACA recipients, and sap our higher

The future of DACA—and the futures of hundreds of thousands of Dreamers—will be argued at the U.S. Supreme Court on November 12, 2019. The Court could hand down a ruling as soon as February 2020 determining if Dreamers will lose the ability to live, study, and work in the United States.