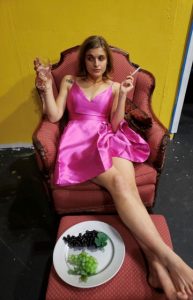 An ostentatious wedding is held at a Tennessee Estate. What could possibly happen? Find out when Northern Essex Community College’s TopNotch Players present “Five Women Wearing the Same Dress,” November 8 through November 10.

The comedy, written by Alan Ball, is co-directed by Brianne Beatrice, NECC theater professor, and Samantha Wheately. The play will be performed in the Chester W. Hawrylciw Theater on the third floor or the Spurk Building on the Haverhill campus, 100 Elliott St. Tickets are $10 for students and seniors and $12 for the general audience.

During an ostentatious wedding reception at a Knoxville, Tennessee, estate, five reluctant, identically clad bridesmaids hide out in an upstairs bedroom, each with her own reason to avoid the proceedings below.

They are Frances (Eliza Volpicelli), a painfully sweet, but sheltered fundamentalist; Mindy (Aileen Corniel) the cheerful, wise-cracking lesbian sister of the groom; Georgeanne (Gwynnethe Glickman) whose heartbreak over her own failed marriage triggers outrageous behavior; Meredith (Sarah Durning) the bride’s younger sister, whose precocious rebelliousness masks a dark secret; and Trisha (Vanessa Romaides) a jaded beauty whose die-hard cynicism about men is called into question when she meets Tripp (Carlyle Bien-Aime) a charming bad-boy usher to whom there is more than meets the eye. As the afternoon wears on, these five very different women joyously discover a common bond in this wickedly funny, irreverent, and touching celebration of the women’s spirit.