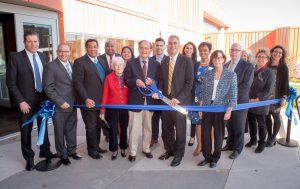 Nearly two years after it was closed for a $6.5 million renovation, Northern Essex Community College’s Dimitry Building at 45 Franklin St., Lawrence, was rededicated on Friday, November 1, with great fanfare.

NECC President Lane Glenn welcomed retired NECC President John Dimitry, for whom the building is named, his wife Audrey and daughter Jane, along with a full complement of legislators and local dignitaries.

In 1991, due to Dimitry’ s leadership, The Prudential Company made the extraordinary donation of 45 Franklin St., a 68,000 square foot building, to the Commonwealth of Massachusetts for use as a Lawrence Campus. Five years later, in 1996, it was dedicated to Dr. Dimitry.

Glenn noted that Northern Essex now occupies a half dozen buildings in Lawrence that serves some 3,000 Lawrence students as well as others. “We would not be here today without the vision of Dr. Dimitry,” he said.

He credited Dimitry, who was the second president of NECC and served for 21 years, with spurring “dramatic growth and expanded academic offerings and creation of a Lawrence Campus.”

Dimitry made numerous trips to the Massachusetts State House to convince legislators of the need for a Lawrence Campus. Following the Lawrence riots of 1984 the state launched the Lawrence Education Employment Project (LEEP) which eventually grew into the Lawrence Campus. Today the campus includes the Dr. Ibrahim El-Hefni Allied Health & Technology Center, 420 Common St., the Louise Haffner Fournier Education Center, and the John R. Dimitry Building.

“We are tremendously proud of what is happening in this building,” Glenn said.

Among other improvements, there is now a room that serves as “home base” for the hundreds of Early College students enrolled at NECC.

Carol Gladstone, Commissioner of the Division of Capital Asset Management and Maintenance (DCAMM) said, “This building is a great example of what we are trying to do across the Commonwealth.”

Massachusetts has many other buildings that were also built in the 1970s and 1980s and in need of renovations or undergoing renovations, she said.

“What a great space this is. It’s inviting. It’s simple but effective,” she said. “This will be a great building for many years to come for you.” 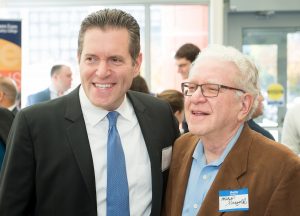 Senator Barry Finegold waxed nostalgically about NECC where his father Michael Finegold, taught for more than 30 years. As a child, he would hide in the back seat of his father’s car hoping his father would forget to drop him at school and he would instead go to NECC with him. Sometimes, he joked, it happened. He remembers fondly that the Dimitrys always made a point to speak with him when he was a young man attending events with his father.

“When we (legislators) think about why we do this job, it’s about creating opportunity…students here have an opportunity…” Finegold said.

“Everyone connected to Northern Essex knows you are helping to make the city better and the Merrimack Valley better,” Finegold said.

Rep. Frank Moran told President Dimitry, “Today is a great day. This building carries your legacy and your leadership. NECC is a shining example of what our community stands for.”

In addition, Moran thanked Glenn for his vision of making Lawrence a “college town.” 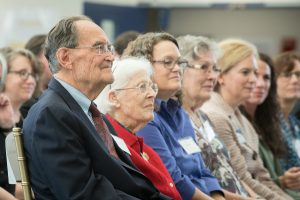 Retired NECC President John Dimitry and his wife Audrey listen to the speakers during the re-dedication event.

Lawrence mayor Dan Rivera said he remembers when the building was owned by Prudential Insurance as his sister worked there.

“To see it renewed as a great viable building where education happens is great,” he said.

Dr. Noemi Custodia-Lora, vice president Lawrence campus and community relations, said the building primarily services first generation Hispanics who are working more than one job. She said the renovated atrium with its seating and Coco Ray’s satellite restaurant, is helpful to both students and staff. While students use the space to socialize and study, staff are readily available to answer questions and direct the students to the resources they need.

A 114 x 14 foot mural created by the nonprofit community program Elevated Thought was unveiled.  The mural depicts imagery that translates into Northern Essex being the path to the future. One image, of a hand, shows the viewer/student that they have the power or control to create their future with the help of Northern Essex and its resources.

Following a ribbon cutting, tours were given of the building.