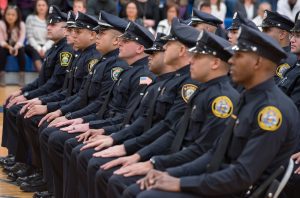 Student Officers listen to speeches during the November 8 graduation ceremony.

A total of 35 men and women graduated on Friday, November 8, 2019, from the Northern Essex Community College/Methuen Police Academy in the NECC Sport & Fitness Center on the Haverhill Campus, 100 Elliott St.

The student police officers represented 14 police departments from across the Commonwealth of Massachusetts.

John Scippa, director of the police academy, acknowledged the approaching Veterans Day, and opened the ceremony by asking past and current members of the armed forces to stand.

Deiby DeJesus, of the Lawrence Police Department, delivered the opening prayer, saying “Six months ago we were right in this very gymnasium trying to figure things out…this academy has equipped us with wisdom, technology, and know how.  We never quit. We never gave up. We never looked back.” 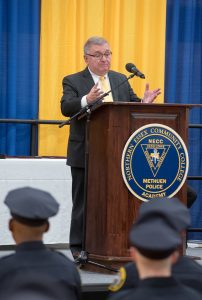 He acknowledged MPTC official Marylou Powers, who after 37 years of service to police training, is preparing for retirement.

“She has been a true friend in the short time we have worked together,” Scippa said.

NECC President Lane Glenn told the audience that the mission of the academy is to “provide high quality education and training.”

“This academy is something I’m most proud of,” he said. “It has produced over 400 police officers for dozens of police departments throughout Massachusetts. You are role models…being watched by a watchful public. I hope this has been a rich and rewarding experience for you.”

Chief Robert Ferullo, interim director of MPTC, told the student officers they are “entering a complicated profession at a complicated time.”

He said he carried a badge for close to 40 years. He told them “Nowhere does it say to go easy on you because you are a rookie.”

He told them to “pay attention…you have been trained by the best…your instincts will develop…take care of yourself…both your physical and mental well being.”

At one time, he said, he sought counseling and is not ashamed. “If you need help, seek out help”. 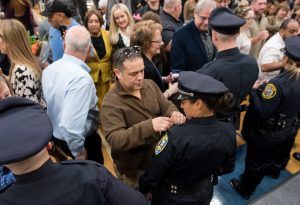 A student officer is pinned with her badge during the NECC/Methuen Police Academy Graduation.

Methuen Mayor James Jajuga, told the graduates they have a big responsibility. “Your job is the best job in the world. You make a difference in people’s lives. When you run into someone who needs your help remember how important you are to them.”

He reminded them to “stay focused and never let your guard down”.

“You should all be proud of yourselves. Over the last 24 weeks we all got a little bit stronger and a little bit faster,” he said. “We have been pushed mentally and physically. For 168 days we were fortunate to be taught by the best faculty and trainers.”

All the graduates completed an intensive program that covered constitutional law, prevention and intervention, community policing, domestic violence, elder abuse, victims’ rights, and other topics. All training took place on the Haverhill Campus except for firearms training and emergency driving techniques, which were held, at off-campus locations.

The academy opened in February 2015 in response to a shortage of academies in the area. At the time, Haverhill Police Chief Alan DeNaro, said that the Merrimack Valley has needed a regional police academy for over 25 years. “By partnering with NECC, we will be able to move quickly and efficiently train our new recruits as they embark on their chosen profession.”